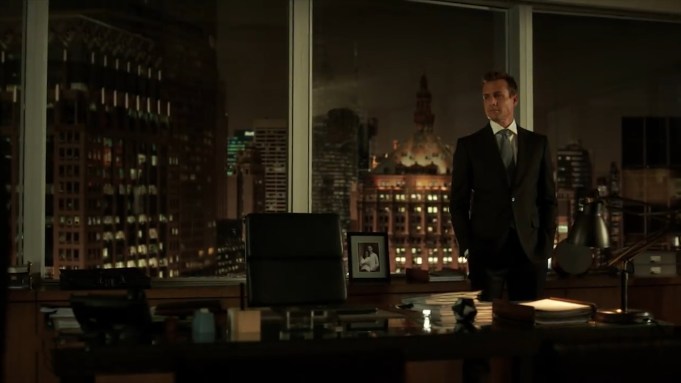 Telling you almost everything you need to know about a long-in-the-tooth show that is getting back in the ring beginning Wednesday, the first time you meet Katherine Heigl in the Season 8 premiere of Suits, the Grey’s Anatomy alum is knocking the stuffing out of a boxing bag.

With Meghan Markle gone to a royal firm in real life and her character Rachel having departed the Aaron Korsh-created series with Patrick J. Adams’ hubby Mike for a new life in Seattle, Suits has nicely added Heigl and made a few changes – and it works. In fact, the result is that USA Network’s flagship series has had a deep dry cleaning that has given a few more years to the old boy, as I say in my video review above.

No spoilers, but from what I’ve seen, with a merger of two law firms and the creation of Zane Specter Litt fueling the action, Heigl’s addition as the ruthlessly ambitious Samantha Wheeler, West Wing vet Dulé Hill and 12 Monkeys star Amanda Schull now series regulars, and revamped opening credits, this new season may be more conventional in the legal drama genre than before. Still, from the existential mourning of Gabriel Macht’s Harvey Specter from the loss of his scamming sideman Mike to Wendell Pierce popping in again as the extracting Robert Zane and strong turns again from Rick Hoffman and Sarah Rafferty, the series is billing the same fees Suits did previously and more than delivering the goods.

For a show that has already fostered an upcoming spinoff with ex-cast regular Gina Torres, the new season of Suits is also not avoiding the departure of Rachel and Mike, who occupied so much of the fit of the show over previous seasons. The constant presence of the space left by their exit and the solidifying of the world and characters viewers invested in year after year is a welcomed arch in a revamping of Suits that ends up being a rather enjoyable revitalization overall.

Whether you are a longtime fan, an old one coming back after time off or a newbie, check out the new season. Suit yourself, but before the show returns, I’d also recommend checking out my video review above.