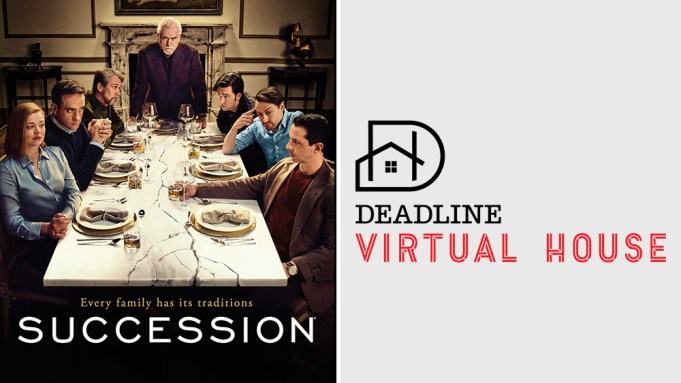 The Emmy-nominated cast of Succession joined me Monday for the latest edition of our Deadline Virtual House video series, where we take a deep dive into the making of some of this year’s most notable nominated shows. And notable HBO’s breakout drama is as it grabbed 18 noms from the Television Academy, and fully half of that total is due to the remarkable cast which with nine acting nominations leads all others this year in those categories (The Marvelous Mrs. Maisel on the comedy side picked up seven mentions for its cast).

Beaming in from around the world from locales including Australia, Switzerland, London, Vermont, New York and all points in between, we were able to gather all of this year’s Succession acting Emmy contenders to talk about just what it is that makes this series such a magnet for actors. Almost to a person the answer was simple: the writing.

The first grouping highlighted the Guest Actor and Guest Actress in a Drama Series nominees. Cherry Jones, actually the defending champ here as she won last year for The Handmaid’s Tale, joined us from Bern, Switzerland. She plays Nan Pierce, the head of a rival company in talks with the Roys about a possible sale/merger. She says coming in as a non-regular can be intimidating but in this instance there was strength in numbers. “Well, I mean it’s daunting with this group because, you know, I saw that first season and was dazzled, but I got to march into battle with all of the Pierces. There were eight of us and there were eight of the Roys. So, we sort of came in onto this battlefield together and we had the best time because there were eight of them and there were eight of us. Because we came in as a team it was a little easier than just coming in solo,” she said.

Nominated in the same category, Harriet Walter had a different task as she plays the ex-wife of Logan Roy (Brian Cox), and mother of three of his dysfunctional brood, only she doesn’t get nearly the screen time as they do in the series but makes the most of it to be sure. As a linchpin of the Royal Shakespeare Company, this celebrated star of the stage sees a connection with the Bard and the Roys.

“One hundred percent. I think that’s why we’re hooked on it,” she said. “Not just because of, we love the monstrosity of them, but because they are extreme versions of family life. You know? Like, King Lear is epic but it’s also a story of love and jealousy and wanting attention and wanting to matter to your dad and you know, all these elements that, you know, wherever you come from, you can relate to, because otherwise why can we relate to these people? They’re so unlike anybody we’d normally come across and I think that’s the big tug is you know, we identify with Kendall’s longing to be loved within this great, terrifying saga.”

As for Guest Actor nominee James Cromwell, a past winner himself in the category, he plays Logan’s brother, but as a sort of distant moral compass for the family, he likes being an ethical counterpart to the others. “Yeah, and the reason for the moral center was quite interesting because of course he grew up with the same sort of privileges and disconnect that people of great wealth and power have, if it follows the Murdoch example… So, I felt very strongly, and I impressed this in no uncertain terms that I did not want to compromise… I said he’s going to stick to his guns, and they let me,” he said.

Succession has four, count ’em, four contenders in the Supporting Acting categories this time around including three alone for Supporting Actor in a Drama Series: Kieran Culkin as Roman Roy; Nicholas Braun as “cousin” Greg; and Matthew Macfadyen as Tom, who is married to Shiv Roy played by Sarah Snook, the sole Succession nominee in Supporting Actress in a Drama Series. With Snook coming in from native Australia and Macfadyen zooming in from England, I naturally had to ask how they handle the fact that they are married Americans in the show.

“We have kind of accent days, when Sarah and I, especially if we have a day together, that we just kind of have a mutual meltdown, and we end up talking to everybody like that, like we can’t do it anymore, and it just goes really badly wrong,” Macfadyen laughed.

Snook added: “It was also the kind of, where there is improv, or where you can just sort of, like, stretch the words of the zing a bit, where you can add something in there or there, you then have to filter, don’t think in an Australian accent, think in an American accent.”

For Culkin, it has been the role of a lifetime. “It’s really fantastic. Like, this is some of the best writing I’ve ever had to work with, and really, it’s funny, because you asked,  earlier how much of it is improvised. I don’t really know anymore. I feel like mostly nothing,” he said. He adds that the freedom the actors have is liberating and benefits the characters. Plusm he gets the lion;s share of zingers to say.

As for Braun, who plays fan favorite Greg, the question seems to be is Greg evolving, no longer what he appeared to be in Season 1. “We’ll see,” he said. “You know, he’s making good moves. I think he’s getting smarter. You know, he’s getting a little more cunning. He’s learning a bit from Tom, a bit from Kendall. He doesn’t quite have the barbs that Roman has. You know, he’s not really mean like that yet, but we’ll see if he kind of grows into that. But yeah, he’s kind of, he’s gaining momentum, I think.”

The only Drama Series category Succession does not have a player in is Lead Actress, but both Golden Globe winner Brian Cox as family patriarch Logan Roy and Critics’ Choice Award winner Jeremy Strong as the ever-unpredictable Kendall Roy face off for Outstanding Lead Actor in a Drama Series. Neither feels like it is a competition, unlike their characters, and are just proud to be included.

“It feels great,” Strong said. “I think we’ve both put so much of ourselves into this, and you know, everyone involved in the show is so completely committed, so it’s wonderful to feel acknowledged for that. And you know, I’m so honored to be alongside this man.”

Cox agreed: “I totally second what Jeremy says. I mean, it’s a great cast, it’s a great ensemble, and it’s amazing that we picked up 18 noms, and particularly exciting that so many of our actors picked up nominations as well, you know, the guests, best supporting, best, both in the female and the male categories. So, it’s a great honor, and it’s an equally great honor that we’re both together. I think that’s fantastic. I think that’s a great thing, and that’s a great thing for the show. And the show, at the end of the day, is the thing, you know? The awards are always lovely, there’s no denying it, but the show has been an amazing, I think Jeremy will agree, it’s been an amazing experience, just to be part of, truly part of a really great community, ensemble, with, in every aspect, the technical side, the writers, the directors, you know, the crew. I mean, a wonderful crew.”