Continue to Deadline SKIP AD
You will be redirected back to your article in seconds
Skip to main content
July 12, 2019 3:51pm
29Comments 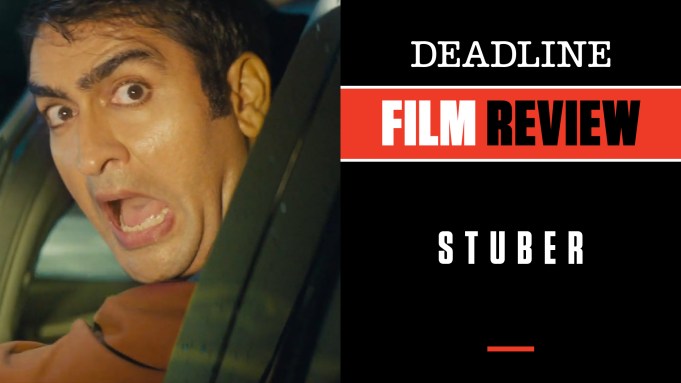 In the new movie Stuber, Stu (Kumail Nanjiani) works as an Uber driver in addition to his day job in a sporting goods store. His main mission in life seems to be a quest to get a five-star rating from his passengers, but it doesn’t always work out that way. If the goal of the filmmakers behind this movie are also to get five-star ratings, you can bet it won’t work out that way either.

Despite the superior comedic talents of Nanjiani to rise above the rather mundane, by-the-numbers script from Tripper Clancy and uninspired direction by Michael Dowse, Stuber remains a confused project. Is it mostly an action picture with comedy thrown in — or is it a comedy with action thrown in? If the latter is the case, then Dowse has severely miscalculated because right from the opening sequence this plays like a nonstop violent cop movie, a hard-R enterprise in that regard for what is really being marketed as lighter summertime funny fare. As an action comedy in the vein of a Ride Along, the tone is all off.

The 1988 Robert De Niro-Charles Grodin pic Midnight Run was the template for these mismatched-buddy pictures, and it really never has been topped. Stuber is a poor distant cousin at best, a movie that is frenetic, loud, over-the-top, predictable and hanging on to the idea that a movie loaded with jokes about ride sharing and apps isn’t going to be hopelessly dated in no time.

What it does have going for it is Nanjiani, who can turn an ordinary line reading into something naturally amusing, even witty. He rises above the material when he’s not asked to be screaming out of fear because of the situation he suddenly finds himself in. That situation involves a tough LAPD cop named Vic (Dave Bautista), who is out to crack a drug ring and its vicious leader (Iko Uwais). When he finally gets a huge tip of an impending drug drop, it falls right after he has completed Lasik eye surgery. He is forbidden to drive for 24 hours and virtually blind — as he discovers when he gets in his car anyway to confront the bad guys. What to do? Well his daughter (Natalie Morales) has just shown him how to get an Uber, a lesson that comes in conveniently handy.

Enter the unsuspecting Stu, who soon finds himself way in over his pay grade. Did I mention Stu also drives an electric car. That plot device comes in handy down the line. Nevertheless, Vic forces Stu to keep the motor running as he hits a number of locations in pursuit of these guys, and of course Stu also finds himself right in the middle of some very dangerous gun battles including one in the middle of an animal hospital. Don’t ask.

Meanwhile Stu also is dealing with the constant insults from the boss at his other job (Jimmy Tatro), as well as his failing attempts to impress his “girlfriend” Becca (Betty Gilpin, mostly acting on Facetime), who seems to be more attracted to sleazy guys than Stu; she mainly appreciates him as a potential investor for her dream bicycle exercise business, Spinsters. In addition to running all over town getting beaten up, Vic has to deal with his superior (Mira Sorvino) in a subplot that is hopelessly telegraphed.

I have to admit I found myself occasionally laughing out loud at some of the Uber jokes (no possibility is ignored), as Nanjiani knows how to sock them home. He’s always fun to watch, so let’s hope he gets better opportunities than this in the future. He is the saving grace of Stuber. The same wish for better material also goes for Bautista, who is likable throughout and might have a future beyond taking Dwayne Johnson’s rejected scripts. Everyone else is pretty one-note here.

Producers are John Francis Daley and Jonathan Goldstein. Disney opened the 20th Century Fox film today. Check out my video review at the link above, which includes scenes from the movie.

Do you plan to see Stuber? Let us know what you think.