Continue to Deadline SKIP AD
You will be redirected back to your article in seconds
Skip to main content
June 22, 2022 12:44pm 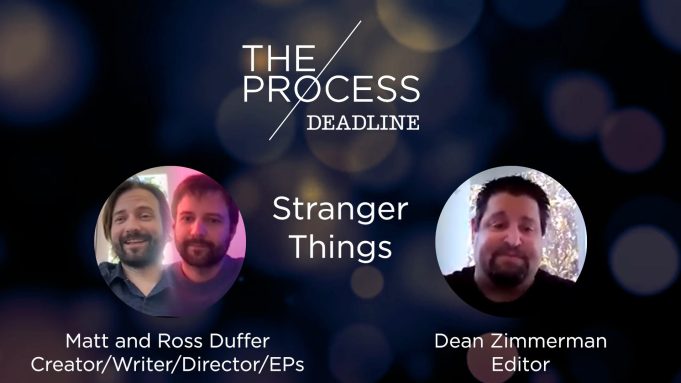 For editor Dean Zimmerman, one of the most appealing aspects of Stranger Things as a series has been that it “feels like a feature”—and nowhere has that been more true than in the Netflix smash’s recently released fourth season.

Broken up into two volumes, with its first set of seven episodes released on May 27, the latest season of the series is, in Zimmerman’s words, “ridiculously massive.” But even as the scale of each given season (and episode) has grown, the editor shares that his work on the series has remained fundamentally the same. “My approach…has always been…to stay true to the story, stay true to the writing,” he says, “and just performance, performance, performance over any and all.”

For the uninitiated, the ’80s set pop culture phenomenon from creators Matt and Ross Duffer follows a group of kids from the fictional town of Hawkins, Indiana as they battle supernatural forces connected to an alternate reality known as The Upside Down. Season 4 picks up months after the Battle of Starcourt, which brought terror and destruction to Hawkins. Struggling with the aftermath, our group of friends are separated for the first time – and navigating the complexities of high school hasn’t made things any easier. In this most vulnerable time, a new and horrifying supernatural threat surfaces, presenting a gruesome mystery that, if solved, might finally put an end to the horrors of the Upside Down.

Zimmerman (who goes by the nickname “Marker”) has been with the series since the beginning and recently took a break from his work on Season 4 Volume 2 for a wide-ranging chat with The Duffer Brothers, as part of Deadline’s video series The Process, in which the collaborators break down the nuts and bolts of the editorial process they’ve established over the course of their first outing together.

In his time with The Duffers, Zimmerman reflects on what a unique phenomenon Stranger Things has been in his career, as a show so well written and executed that very few structural changes have needed to be made, with only a couple of scenes ever landing on the cutting room floor. He also discusses the moviegoing experience that made him want to be an editor, lessons taken from his editor father about the craft, his memory of the day he interviewed for Stranger Things, how his own “twinness” has informed the depth of his connection with the show’s twin creatives and why he believes his creative partnership with them is “one that’s going to last a lifetime.” Additional topics touched on include the role he’s played in helping viewers fall in love with Stranger Things‘ characters, his enjoyment this year in cutting scenes featuring new characters, including standout Joseph Quinn’s Eddie Munson, and a request he has for the company behind the Avid.

The Duffers speak for their part to their outlining and writing processes, their singular “hive mind” with Zimmerman, Stranger Things’ varying styles of actors, being complimented by Netflix on how clean the sound is in their first cuts, perfecting the music placement for the stunning Episode 4 sequence that has put Kate Bush’s “Running Up That Hill” at the top of the charts decades after its release, scenes this season that took a while to crack, challenges in tone and pacing and more.

Since Stranger Things‘ release in 2016, the series has garnered over 65 award wins and 175 award nominations, including an Emmy and two noms for Zimmerman. The show produced by Monkey Massacre Productions and 21 Laps Entertainment returns with its second Season 4 volume of two episodes on July 1st and will wrap up at Season 5. The Duffer Brothers serve as executive producers on the series, alongside Shawn Levy and Dan Cohen of 21 Laps Entertainment, Iain Paterson and Curtis Gwinn.

Watch The Duffer Brothers’ entire conversation with Zimmerman above.