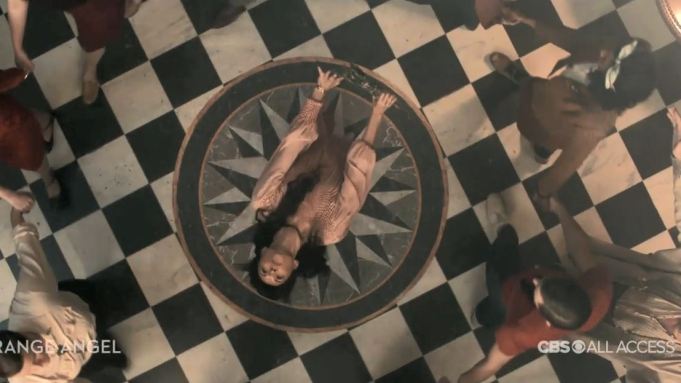 Two quotes from the Season 2 trailer for Strange Angel that spotlight the dichotomy of the CBS All Access period drama that melds science and the occult: “It’s not just about winning this war — it’s about winning every war to come,” and, “There are rituals of the elements and feasts of the times — a feast for life and a greater feast for death.”

Honestly now: Which side would you rather hang out with?

Jack Reynor stars in the based-on-a-true-story tale as Jack Parsons, a Caltech professor whose team made a scientific breakthrough in Season 1 that secured the military’s interest as the country neared the brink of war. But he’s also a devotee of one Aleister Crowley, He is pioneering America’s rocketry program while simultaneously practicing sex magick rituals from the infamous Englishman’s religion, Thelema.

By Season 2, the U.S. is fully engaged in World War II, transforming Jack’s rocketry work into a lucrative business and further entrenching him in the military-industrial complex. While Jack’s career takes off, he and his wife Susan’s (Bella Heathcote) devotion to their new occult religion grows, leading them to invite the sex cult into their Pasadena mansion and Jack to forge a personal relationship with the group’s notorious founder, Mr. Crowley himself (Angus Macfadyen).

Rupert Friend and Peter Mark Kendall co-star in Strange Angel, which returns for S2 on June 13. Created by Mark Heyman and based on George Pendle’s book, the series is produced by CBS Television Studios in association with Scott Free Productions. Heyman, David DiGilio, Ridley Scott and David W. Zucker serve as executive producers, with Clayton Krueger as co-executive producer.

So spin some Ozzy Osbourne, maybe sip a bloody Mary and check out the trailer above and the key art below.  Then tell us what you think.