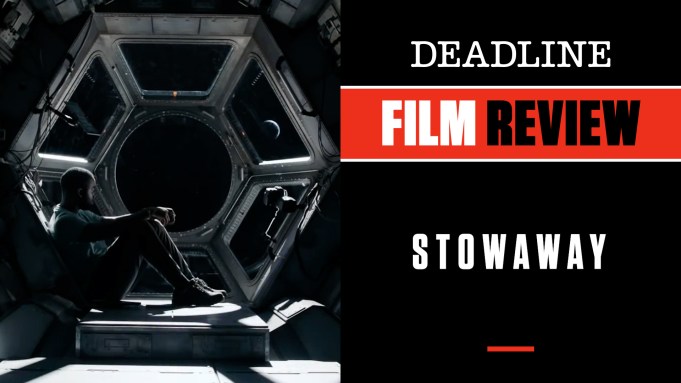 Director Joe Penna apparently likes barren open spaces. The Brazilian filmmaker made a fine first film, Arctic, taking place on that frigid corner of the earth, and now he has switched to outer space as three team crew members, and unknowingly a fourth, head out on a mission to a colony on Mars but find big trouble before they get anywhere near there. This is a well-worn genre, and I still maintain that no one has achieved the heights of Stanley Kubrick’s 1968 classic 2001: A Space Odyssey, but Hollywood keeps trying.

Stowaway is a moody affair that takes a long time to take flight and only occasionally sparks at all. It basically is a human drama with an intriguing premise that never really gets played out satisfactorily in the script Penna wrote with and Ryan Morrison. A good cast tries mightily to inject some energy into this brooding saga, but it is tough sledding.

The premise has Commander Marina Barnett (Toni Collette) embarking on her third and final mission to a Mars colony, an important effort to bring key information back from this manned mission as part of the Kingfisher Rocket and Hyperion’s MTS-42 expedition to the Red Planet somewhere in the not-so-far-off future. Along for the two-year mission are wide-eyed and empathetic medical researcher Zoe Levenson (Anna Kendrick) and nerdy biologist David Kim (Daniel Dae Kim), who is in the midst of sensitive experiments he hopes come to fruition during the voyage.

But upon docking with a miniature space station, they make a startling discovery when blood drips to the floor. They are not alone, and in fact a “stowaway” emerges wrapped around a pipe attached to the carbon dioxide removal assembly, a key point of life support. When he comes back to life, we discover he is Michael Adams (Shamier Anderson), a flight pad engineer who somehow got injured and failed to get out of the ship before takeoff. Now realizing this journey has begun, he freaks out, worried about leaving behind his sister. He begs them to turn around and get him back to Earth, of course an impossibility. The others calm him down, and eventually he realizes the only course of action is to become part of the team.

Barnett makes contact with his sister and assures him she is fine, but the real crux of the problem soon emerges when the cold, hard fact of not enough oxygen to support a crew of four rears its ugly head. Each of the crew has a different take on this. Zoe is compassionate, willing to try anything to create new sources of oxygen in order to safely have enough to get to Mars with all four alive. David sees his experiments and years of preparation blowing up in his face. Barnett is the realist, laying out unattractive alternatives — basically who will sacrifice themselves for the good of the mission. Soon this becomes a Solomon’s Choice kind of situation, and not one with a desirable solution in sight. The second half of the film spends much time outside of the spaceship as it turns into Gravity-lite, though the special effects are impressive and Kendrick especially tries to ratchet up the emotion, even in a spacesuit.

Penna expertly guides all this, but the ultimate effect is kind of meh — not the fault of our stars, though. Collette is believable as a no-nonsense veteran leader, while Kendrick summons up the maximum amount of passion to save the day. Kim is stoic, and Anderson does what he can in an underwritten role playing the title character and the reason for my interest in the concept, but he never really developed with much credibility. Props, though, to the casting in a genre traditionally dominated by white men. Caucasian men are nowhere to be found in crew of two women, an Asian man and a Black man on a mission to Mars. Things may be improving when you get a cast like this that never was the norm in the checkered past of the industry. Nice.

Producers are Aram Tertzakian, Nick Spicer, Ulrich Schwarz, Maximilian Leo and Jonas Katzenstein. Netflix begins streaming the pic Friday. Check out my video review with scenes from the film at the link above.

Do you plan to see Stowaway? Let us know what you think.