Continue to Deadline SKIP AD
You will be redirected back to your article in seconds
Skip to main content
July 8, 2021 3:24pm 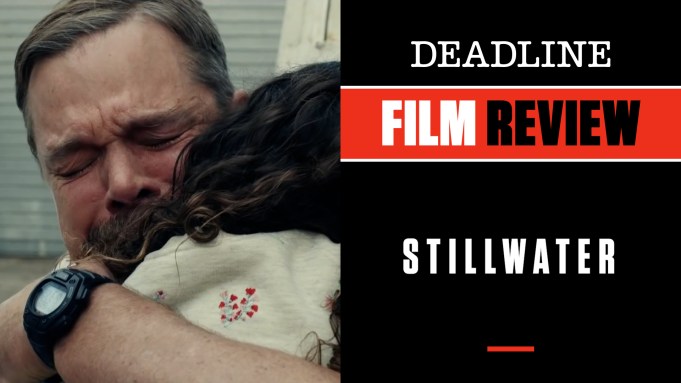 UPDATE 7/30/21: To Clarify Legal Status Of Amanda Knox.    The 2007 case of Amanda Knox, the American convicted in an Italian court of murdering her roommate (after being convicted and spending four years in jail Knox was acquitted and freed in 2011. She was later definitively exonerated by the Italian Supreme Court Of Cassation in March 2015), was the impetus for writer-director Tom McCarthy’s Stillwater, but in the 10 years since beginning, abandoning and starting over, it has evolved into something much more – and much better.

Premiering as an Official Selection out of competition at the Cannes Film Festival today, the film offers a rich opportunity for star Matt Damon to deliver an understated and authentic turn — one of his career bests — as Bill Baker, an Oklahoma-based unemployed oil rigger man whose wife killed herself and whose estranged daughter Allison (Abigail Breslin) took off for Marseille where she eventually was convicted and sentenced to a French prison for nine years in the murder of her roommate and lover Lina. Five years have passed and, still professing her innocence, she sees a new legal opportunity arise and, with the help of her father, hopes to be released. In an effort to turn his own life around and connect with his daughter in a way he never could, Bill travels to Marseille and sets out to find Akim (Idir Azoughi), the young man that Allison says was the real killer.

If all that sounds like the setup for a Liam Neeson thriller in which Dad comes barreling in to save the day, think again. What McCarthy, smartly employing two additional French screenwriters in Thomas Bidegain (A Prophet) and his partner Noe Debre, has done is more akin to the brilliant 1985 film Witness, in which Harrison Ford played a police detective who finds himself on a murder investigation as a fish out of water in Pennsylvania’s Amish country, where he gets romantically involved with a local woman with a young son. Elements of that fine, Oscar-winning movie kept running through my head as I watched this engaging adult drama, almost a fish out of water itself in a summer full of the usual studio tentpoles and animated family fare.

This kind of film aimed at more sophisticated filmgoers is indeed an endangered species as far as studios go (the distributor is Universal’s specialty division, Focus Features). It stands out for that alone but also for other reasons, as the first section is more procedural-like with Bill trying to deal with the complicated French legal system while beginning to get clues to tracking down the mysterious Akim, a guy Allison and Lina met in a bar the night before she suddenly turns up dead in their apartment. Although it is like finding a needle in a haystack, Bill enlists the help of Virginie (Camille Cottin), a French stage actress he met while staying at the Best Western in town. He winds up befriending her young daughter Maya (Lilou Siauvaud), and that leads to a friendship where Virginie helps him out on his quest, especially since he can’t speak a word of French. It also gives him a chance to show with Maya the good father figure he hoped he could have been with his own daughter, but never was.

One night, after getting beaten up by a group of toughs, he actually spots Akim. But during a prison visit later, Bill is berated by his daughter for letting him get away — their relationship now spiraling downward again. Cut to four months later, Bill, still in Marseille, has some construction work and is roommates with Virginie and Maya. This section focuses on their emerging romantic relationship and a time of renewal for Bill. With Allison’s hope for release more dim than ever, a chance encounter puts Bill back on a mission to help her. To say more is to say too much, but it is gripping all the way.

Damon is at the top of his game here — no Bourne theatrics on this trip to Europe and resisting any attempt to become anything more than a man with a troubled past trying to right the course of the rest of his life by being something other than a “f*ckup” as Allison describes him. His Oklahoma accent is right on the money, and lest any political inferences get in the way, Bill is asked by a friend of Virginie’s if he voted for Trump to which he replies, ‘No, I didn’t vote” and reveals that a jail record made him ineligible anyway.

The main focus is on the building relationship with his new makeshift French family, and Cottin is simply superb here — warm and wise, a good mother, a good friend to Bill and someone not really looking for love until it hits her unexpectedly. If you haven’t seen her in Netflix’s wonderful French comedy series Call My Agent!, check it out. It is clear some great opportunities are in front of this superb actress. Newcomer Siauvaud is irresistible, and perfectly cast. There also is a fine group of French actors in supporting turns, and fortunately this is one English-language American production in which all the French characters actually speak in French to one another (there are subtitles). There is no question why they wanted to debut this in Cannes since Marseille is as much a character here as any of the humans, with Stillwater only serving as bookends for the story. Masanobu Takayanagi’s (Spotlight, Silver Linings Playbook) cinematography is first rate. Mychael Danna’s pulsating, low-key score is enormously effective.

Producers of the Focus Features/Participant/DreamWorks production (pretty much the same combination of companies that gave us the Oscar-winning Green Book) are Steve Golin, Liza Chasin, Jonathan King and McCarthy, who with this film adds another small gem to a filmography that includes The Station Agent, The Visitor, the Oscar-winning Spotlight and Pixar’s animated Up — all films with an emphasis on humanity in one way or another just like this one. The timing for a movie like Stillwater could not be better, and hopefully there is a place for it in the ever-changing theatrical landscape. Focus will release the film in theaters July 30. Check out my video review with scenes from the movie at the link above.

Do you plan to see Stillwater? Let us know what you think.