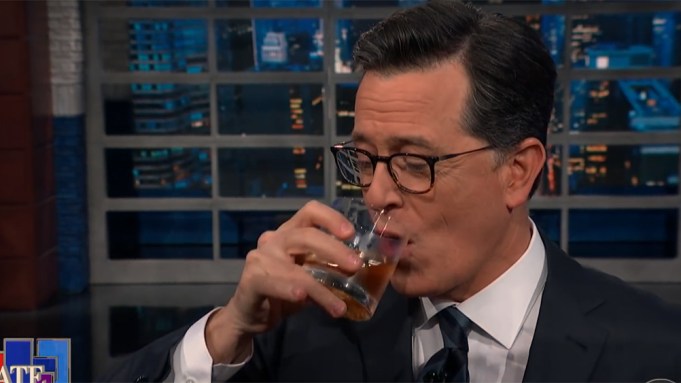 “We just watched what you just watched. We felt what you felt. We drank what you drank. Only now, we’re drunk at work.” Those words from Late Show host Stephen Colbert during his monologue Tuesday as he pondered Donald Trump’s State of the Union speech. “I hope my boss doesn’t find out.. Oh wait, that’s me. I’m sure he’s gonna be cool with it,” as he sips a shot of whisky.

Colbert explained things got a little awkward at times during the speech, as Trump was addressing people who were still deciding his fate in the impeachment trial.

He recalled the moment they introduced the Supreme Court justices, led by John Roberts “who is still working double duty by overseeing the impeachment trial, yet another American forced to work two jobs in Trump’s economy,” Colbert joked.

The Late Show host noted some speech highlights during the monologue, including Trump’s comments about high-speed internet for rural America (“To which Iowa replied, ‘That would have been handy yesterday”) and Trump’s claim about “a record number of young Americans” being employed (“Mostly campaigning for Bernie.”).

“You know what Madame Speaker? The next time, don’t offer your hand. Just offer him one finger,” Colbert advised.

You can watch the entire monologue above.