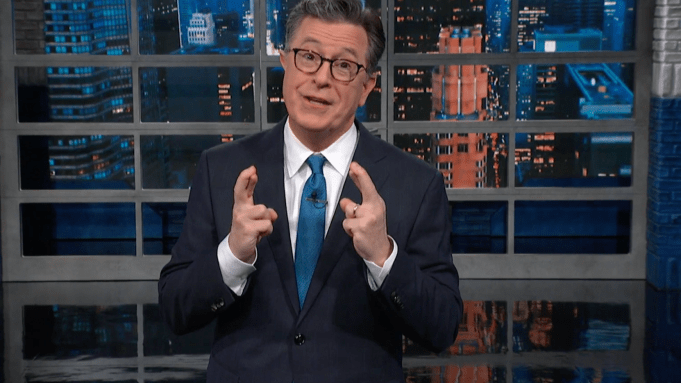 Colbert opens the show by stating tonight is different, that there is something in the air that makes tonight special.

“There’s a crispness in the air, and the magical sparkle that could only mean one thing: It’s infrastructure season,” he jokes.

The infrastructure bill has been hot on everyone’s minds and today the bill passed. To celebrate Colbert acknowledges that its ‘infrastructure season’ with a some laughs to bring levity to a bad situation.

“Will Santa bring us the steel I-Beams we asked for from China?!” He continues, “Is that him on the roof? He should really wait until we install those steel I-beams.”

Today the President  signed his bipartisan bill into law with a roadshow to present the benefits of the bill to the general public. It’s a strange way to announce this to the public but the Late Show host puts that into perspective

“It’s like the antique’s roadshow if the road was the antique,” Colbert said.

Biden’s  first stop on the roadshow was New Hampshire and in a clip from one of his press conferences the President mentions how he’s visiting a bridge that is “structurally not safe.” The host was supremely shocked by Biden’s comment and let out a gasp before he could finally get the words out to describe how surprised he is.

Watch the full opening monologue above