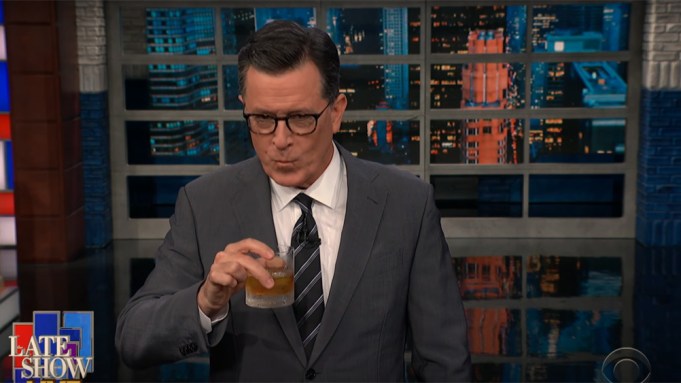 Stephen Colbert poked fun at nearly all the candidates on stage last night at the third Democratic debate in Houston.

In a live show following the face-off, Colbert jokingly noted Elizabeth Warren’s “folksy roots,” after she recalled in her opening remarks being a working mother, living in Houston. “By then, I had two little kids, and when child care nearly brought me down, my Aunt Bee moved in and saved us all.”

“Play the radio,” Biden suggested. “Make sure the television– excuse me, make sure you have the record player on at night, the phon– make sure that kids hear words.”

Colbert joked in a crack at Biden’s age: “Crank the Victrola and put on the Mitch Miller! And then get yourself a new wireless set and gather around the whole family and stare at it and listen to F.D.R. give it good to Tojo and his boys! Corregidor!”

Bernie Sanders, who sounded a bit hoarse and spoke in a raspier-than-usual voice, also was a popular target.
“Now, Bernie Sanders, of course, looks like a man who always carries a lozenge in his pocket. Well, tonight it really should have been unwrapped,” Colbert said.

Colbert then replayed the clip of Sanders saying, “We must and will defeat Trump, the most dangerous president in the history of this country.”

“Almost as dangerous as the bumblebee that I swallowed before this debate,” Colbert said, mimicking Sanders. “Got it right there! I am going into anaphylactic shock, which would be covered under Medicare for all.”

You can watch the clip of Colbert’s entire monologue above.