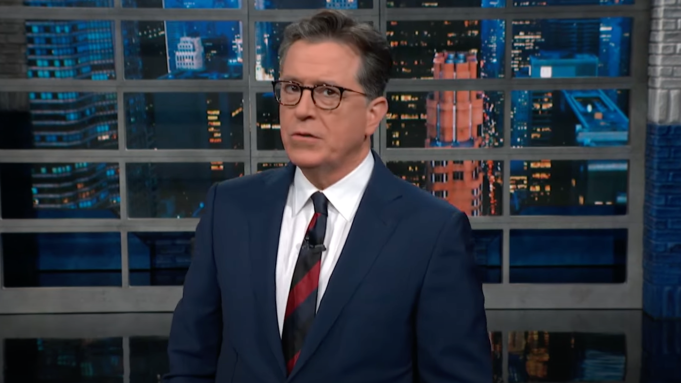 “Today’s been a monumentally bad day for Facebook, the world’s top social media network and uncle radicalizer,” he said.

The late-night host addressed the role and influence of Facebook groups.

“Facebook does, for example, have coordinated groups on Facebook that sow discord and violence, including on January 6th. That’s an addition to the discord your cousin sows on Facebook by announcing she’s named her twins Dash and Otter.”

Colbert cited Facebook CEO Mark Zuckerberg’s statement that the platform removes 94 percent of hate speech, contradicted by Facebook’s own researchers who admitted that in reality, the portion removed is less than 5%.

He also poked fun at Zuckerberg’s infamous sunblock incident when he was photographed surfing in Hawaii smeared in sunscreen that made him look like a ghost.

“His influence was so strong that he former VP at Facebook said the specter of Zuckerberg looms in everything the company does. Okay, but is it his specter?! Or did he just wear too much sunscreen again?”