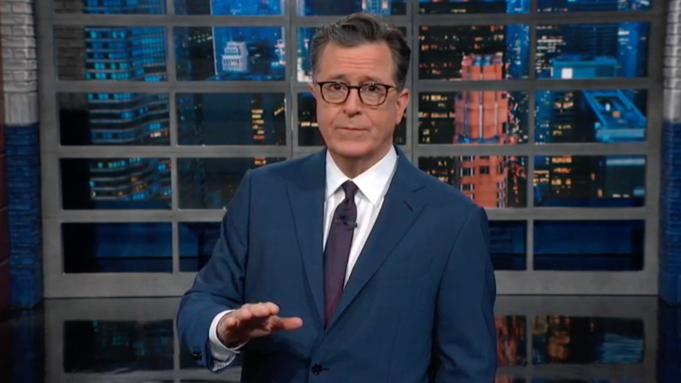 On tonight’s episode of CBS’ Late Show, Stephen Colbert talked about Halloween and the billionaires who aren’t in the spooky holiday spirit. Trick-or-treaters traveled to the mansion of businessman Jeff Bezos and were told Bezos was not participating in Halloween.

“Not participating in Halloween? Then why did he spend all year costume Daz, panic, Pete, the squeeze toy,” said Colbert.

Normally, this would seem like a bah-humbug moment, but according to the late night host, Bezos wasn’t home, but instead was celebrating Bill Gates 66th birthday in a Turkish Cove. The host imagines what type of gift Bezos brought to the birthday party.

“Bezos didn’t actually get Gates a gift, but he did give him this card saying you’re turning 66, not participating in your birthday.”

The birthday boys got flack for being hypocritical. Gates is a big advocate for climate change reform, at his party  he transported 50 guests by helicopter from his $2 million a week rental yacht, while Bezos stayed on his own yacht and transported back and forth with his own helicopter.

Comedian Colbert surmised the two men came up with a way to balance things out despite their violations to the environment.

“Keep in mind on the helicopter. They used paper straws, so all washes out.”