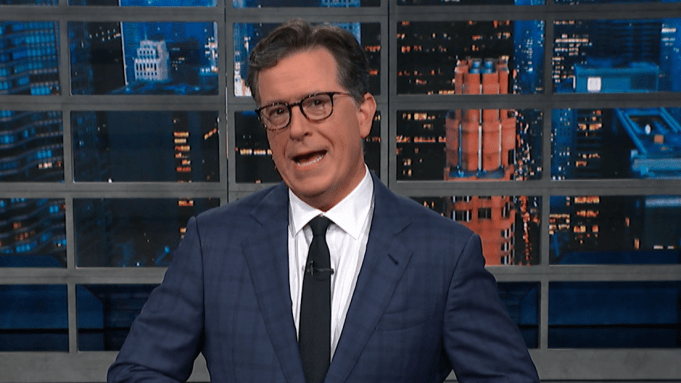 Tuesday was a “beautiful day” for New York City, from the perspective of The Late Show‘s Stephen Colbert.

While the weather was nice, the clear highlight for the late-night host was that “this afternoon, Andrew Cuomo resigned.”

“Don’t let the door hit you on the butt on the way out,” Colbert added. “But if it does, that door should also resign.”

Colbert said he only takes issue with the embattled New York Gov.’s resignation because it won’t take effect for 14 more days. “Evidently, he gave himself two weeks’ notice,” he joked.

He then got into the accusations of sexual harassment against the Governor, and his comments about them at a press conference earlier in the day, as captured in CBSN’s live broadcast.

“In my mind, I’ve never crossed the line with anyone,” Cuomo said. “But I didn’t realize the extent to which the line has been redrawn.”

“I don’t know exactly what line he’s talking about, but hopefully he’ll explain it in his new book, Andrew and the Purple Crayon,” quipped Colbert.

Cuomo’s resignation comes on the heels of a report released by New York Attorney General Letitia James on August 3, which concluded that he had “sexually harassed multiple women,” in violation of federal and state law, also retaliating against at least one former employee who spoke out about his conduct. President Joe Biden told reporters today that he respects “the governor’s decision” to step down.

For Colbert, one of the silver linings of the Cuomo debacle is that New York will soon have its first female Governor, with current Lieutenant Governor Kathy Hochul stepping into the role.

“Hochul will be taking the seat vacated by Cuomo,” he said, “hopefully after putting a towel down first.”