Continue to Deadline SKIP AD
You will be redirected back to your article in seconds
Skip to main content
April 11, 2019 6:02am 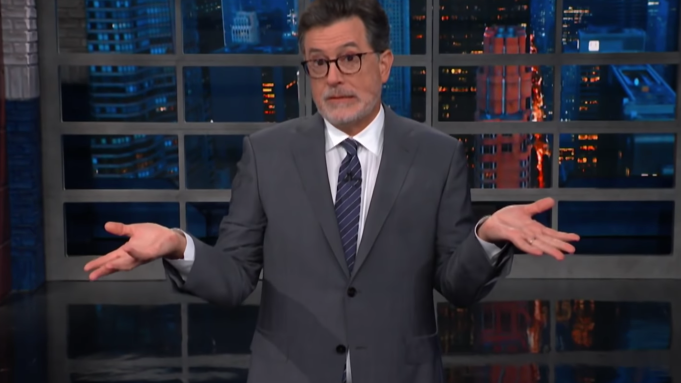 Hours before Barr’s testimony before a Senate committee, Trump dog-whistled him, yelling at reporters on the White House lawn, lashing out at Robert Mueller’s report on Russian interference in the election. Trump said he had not seen or read the report but nonetheless declared it an attempted coup, possible treason, adding “Everybody knows I won.”

“Describing a legitimate counterintelligence investigation as a ‘coup’ is just the mad rambling of a syphilitic brain that no sane, responsible, adult person would touch with a 10-foot pole,” the CBS late-night host insisted.

Barr announced he had assembled a team to investigate how the Russia investigation began. “Yes! The FBI had credible evidence of connections between the Trump campaign and Russia. But why was the evidence so credible? That seems suspicious,” Colbert said, spelling out Barr’s thinking.

Barr rocked the cable news ecosystem, as one committee member described during the testimony, explaining he thinks “spying on a political campaign is a big deal.” When one senator asked him, “but you’re not suggesting spying occurred?” Barr sputtered a while, finally responding, “I think spying did occur. Yes, I think spying did occur.”