Continue to Deadline SKIP AD
You will be redirected back to your article in seconds
Skip to main content
May 8, 2018 3:26pm 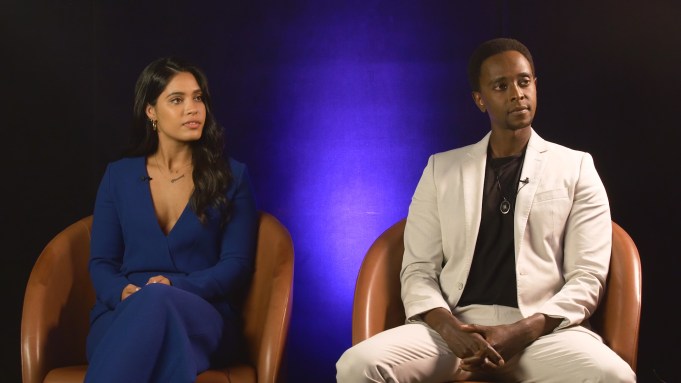 “I think scope and relationships have evolved,” StartUp star Edi Gathegi says of how the Sony Crackle tech thriller series has changed going into its third season. “We go to places that are much bigger than any of us thought we could do on that network,” the Twilight Saga alum adds. “I think one of the themes about this upcoming season is loyalty and responsibility.”

Gathegi was joined by fellow cast member Otmara Marrero on the latest installment of Next Generation TV. The duo came ready and on point to discuss where StartUp has been, where it’s going and what the series means coming out of its sophomore season.

“They see the underdog win a lot in this show,” Marrero declares of the audience’s POV of her digital-currency-creating anti-hero Izzy Morales and the characters portrayed by Gathegi and Adam Brody in the series created by Ben Ketai. “Even though they see us fall a lot, they see us win and that gives people hope.”

“I get a lot of girls that DM me and they’re like wow, I’m so inspired by Izzy,” the actress says of the impact of her Latina tech developer role.

Having launched on the streaming service in September 2016, the Martin Freeman-starring StartUp added Ron Perlman and more for its second season in what was a reboot of sorts that went to some much darker places. A 10-episode third season was announced in November with Oscar winner Mira Sorvino set to guest star as an NSA agent with some hostile takeover aims of her own.

In that context, take a look at my conversation with Gathegi and Marrero above. Also watch the May 1 Next Gen TV with Unsolved: The Murders of Tupac and the Notorious B.I.G. actors Wavyy Jonez and Marcc Rose. Additionally, see the April 24 interview with The Oath cast members Katrina Law and  Cory Hardrict, and my chat with SMILF‘s creator and star Frankie Shaw from April 20.