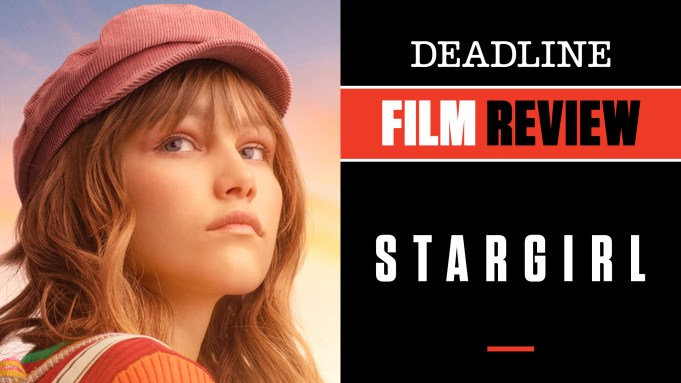 With virtually all movie theaters in America and much of the world shut down for an indefinite period due to the coronavirus crisis, my film reviews for the time being will focus on streaming debuts (Netflix, Disney+, Hulu, Apple, Amazon, etc.) and higher-end VOD entries — and I am discovering there are certainly a multitude worth talking about. Case in point is a new one from Disney+ that debuted over the weekend called Stargirl. That title won’t be unfamiliar to legions of teens who read Jerry Spinelli’s 2000 YA bestseller, about an unconventional and seemingly magical girl who comes into the life of a lonely teen boy in Arizona, changing it forever.

Faithful to the beloved book, director Julia Hart and writers Jordan Horowitz and Kristin Hahn still manage to bring a sweet and smart cinematic touch that is more reminiscent of what the late great John Hughes regularly tapped into with films like Pretty In Pink and Sixteen Candles than the kind of stuff Disney Channel turns out, for instance.  Hart, who clearly knows how to populate her films with authentic and fresh talent, has been blessed to find Season 11 America’s Got Talent winner Grace Vanderwaal, who plays the title character, and Graham Verchere, who plays Leo Borlock, the young guy smitten with her. They have instant chemistry in the sweetest way imaginable and make this story come alive.

Verchere narrates the action as Leo, an unconventional kid whose dad died when Leo was only 9, and then found himself uprooted by his mother to a nowhere town in Arizona where he finds it hard to fit in with the kids at Mica High. Seemingly out of nowhere, Stargirl aka Susan Carraway appears and instantly gets his attention. She also is clearly a standout from the rest of the crowd, something to which Leo is instantly drawn. How many girls do you know who carry around a ukulele at all times? They strike up a friendship and she proves a very good companion, and soon she has the whole school on her side when she appears with marching band and uke to sing a rendition of the Beach Boys tune “Be True to Your School” at the big game. Suddenly, along with other well-known songs like The Go-Go’s “We Got The Beat,” the hapless team starts winning. It appears, as she does with Leo, to have some sort of undefined magic touch she can bring to anything around her, but it’s ethereal and never pronounced in a way that would send this careening into fantasyland.

Stargirl is firmly planted in the real world of teens, and it is nice to report the usual stereotypes are thrown out the window here. When a key player for the other team is injured and Stargirl immediately runs to his aid, much to the chagrin of the other students, things suddenly change, so it does get a little complicated but never in a phony way to create unnecessary drama for a story that marches to its own beat. Vanderwaal has the right stuff, musically and surprisingly with acting chops that never make it look like she’s trying too hard. Verchere is a true natural as well, and though these two dominate the action some grownups show up, notably Breaking Bad’s Giancarlo Esposito offering sage advice.

This is a promising film for the future of Disney+ to be sure. Hart continues to show great promise behind the camera, and you might check out her past films including Fast Color and Miss Stevens, the latter about a drama class field trip that features an early, not-to-be-missed performance by Timothée Chalamet that not only proves his talent, but also Hart’s for casting. Horowitz, who co-wrote this adaptation, was a producer of La La Land and they frequently work together (they are also married). It’s a great screen team to be sure if Stargirl is an example of what they continue to have up their sleeve.

Check out my video review at the link above with scenes from the film. Do you plan to see Stargirl? Let us know what you think.