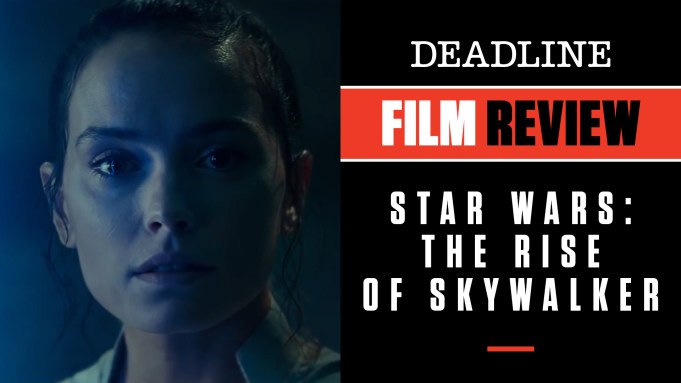 Making a Star Wars movie can be a thankless job. Reviewing one can be too. Rest easy, I will not be revealing any spoilers about Star Wars: The Rise of Skywalker — and there would be a lot of them — but instead I am taking on the central questions for the final chapter in the nine-episode movie series: Does it work, and would it matter to fans anyway?

Rise of Skywalker does work for the most part, especially for those fans who have come to expect big things from this series and might have been turned off by some of the detours the previous edition, The Last Jedi from director Rian Johnson, took two years ago. J.J. Abrams — returning to the director’s chair four years after helming the first Disney-owned Lucasfilm reboot of the iconic series, The Force Awakens, to good results — seems to know what the devotees expect, and he gives it to them. You can’t blame him and co-writer Chris Terrio for throwing everything into this one, even if you are not such a rabid fan that you don’t know where they are going or what they are talking about half the time.

It still is lots of fun for non-zealots and comes close to capturing the awesome thrill of seeing George Lucas’ original in 1977, if not in any way matching it. It is hard to compete with Carrie Fisher, Mark Hamill and Harrison Ford in those iconic roles, but a different trio who make up the resistance do their best and largely fill the bill.

Daisy Ridley’s Rey, Oscar Isaac’s Poe and John Boyega’s Finn and the Millennium Falcon are on the trail of Palpatine (Ian McDiarmid), the evil Sith who has re-emerged and now is known to be in a cave-like secret location in Exogol, something the Resistance is determined to find before the First Order can regroup and succeed with their plans to rule all. Palpatine sees Kylo Ren (Adam Driver), the grandson of Darth Vader, as his heir apparent, and the movie opens in a very dark way, showing just how deep in Ren has gotten (he often wears a red and black mask in a bid to emulate Granddad). Ren also has a thing for Rey and wants her to join him on the Dark Side. She wants none of it, but complications arise.

Rey has been entrusted with General Leia’s lightsaber in order to take on the mission that now is so important to complete (plus she has really developed some impressive CGI superpowers). The late Carrie Fisher is brought back as Leia with unused footage from the two previous films, and it works effectively in allowing us to see this all-important character one last time, and in a very poignant manner. Rest assured Hamill shows up briefly and reverses any damage to his character inflicted in the odd direction Luke took in Jedi. Of course C-3PO and Chewbacca and all those droids are still with us, thank the maker. (By the way, Anthony Daniels as C-3PO is the only actor to have appeared in all nine films.) It is also fun to have Billy Dee Williams back as Lando Calrissian. There’s even a cameo lurking from another fan favorite.

Like I said, Abrams has thought of everything, even if there’s just way too much exposition — almost to the point I would recommend getting a copy of Star Wars for Dummies, if it exists. Of course the production values are superb, and the special effects better than ever. And it wouldn’t be a Star Wars without the irreplaceable John Williams, now 87 and still giving the Stormtroopers some glorious marching music, and much more.

Producers are Kathleen Kennedy, Michelle Rejwan, and Abrams. Disney opens it Friday. Check out my video review with clips from the movie by clicking the link above.

Do you plan to see Star Wars: The Rise of Skywalker? Let us know what you think.

‘Star Wars: Rise Of Skywalker’ World Premiere: Don’t Expect A Big One Like This Until ‘Avatar 2’