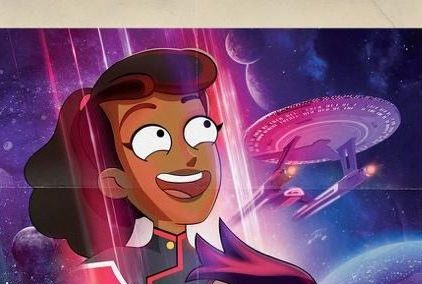 The official trailer and key art for the new animated comedy Star Trek: Lower Decks is out. The show bows on streaming subscription service CBS All Access on Aug. 6

Following the premiere, new episodes of the series’ 10-episode first season will be available to stream weekly on Thursdays, exclusively for CBS All Access subscribers in the US.

Developed by Emmy Award-winner Mike McMahan (Rick and Morty Solar Opposites), the series focuses on the support crew serving on one of Starfleet’s least important ships, the U.S.S. Cerritos, in 2380.

Ensigns Mariner, Boimler, Rutherford, and Tendi have to keep up with their duties and their social lives, often while the ship is being rocked by a multitude of sci-fi anomalies.

Aaron Baiers (Secret Hideout), who brought McMahan to the project, serves as a co-executive producer. Titmouse (Big Mouth), the Emmy Award-winning independent animation production company, serves as the animation studio for the series.

Also on board is the recently announced U.S.S. Enterprise set series Star Trek: Strange New Worlds, featuring Anson Mount, Rebecca Romijn and Ethan Peck; and the development of a Section 31-based series with Michelle Yeoh. A CG-animated “Star Trek” series aimed at younger audiences is also in the works for Nickelodeon.