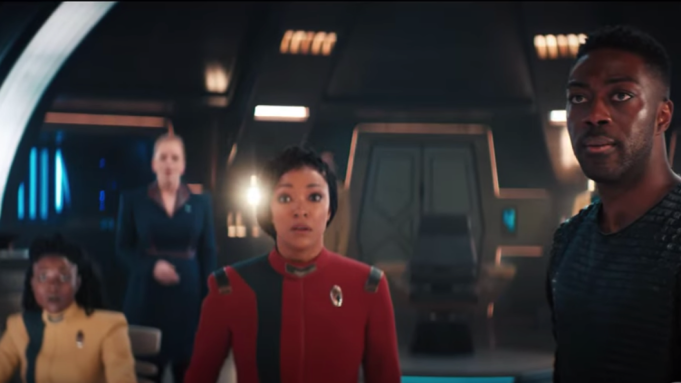 Paramount+ gave Star Trek: Discovery viewers and fans a glimpse at what Season 4 has in store during the First Contact Day virtual event.

After Season 3 finds the U.S.S. Discovery crew in an unknown future far from the home they once knew, the space explorers encounter an unpredictable gravitational anomaly that could bring their journey to an end. Now living in a time filled with uncertainty, the Discovery crew, along with the help of some new friends, must work together to restore hope to the Federation.

“We’re all living in uncertainty. Even for a crew as familiar with it as this one, the stress is taking its toll,” Sonequa Martin-Green’s Commander Burnham says. “But we are not in this alone, none of us are.”

From total destruction to parts of the U.S.S. Discovery to the loss of beloved crew members, the Star Trek: Discovery Season 4 teaser hints at an enemy that’s larger than anyone aboard the spaceship.

To face the invisible adversary that comes without “any kind of warning at all,” Commander Burnham says it’s imperative that everyone band together to retain hope and escape the unknown.

Star Trek: Discovery Season 4 will premiere on Paramount+ in 2021 and also features Doug Jones, Anthony Rapp, Mary Wiseman, Wilson Cruz, David Ajala, Blu del Barrio and Ian Alexander. The sci-fi series streams exclusively on Paramount+ in the U.S., and the series is distributed concurrently by ViacomCBS Global Distribution Group on Netflix in 190 countries and in Canada on Bell Media’s CTV Sci-Fi Channel and streams on Crave. The series is produced by CBS Studios in association with Secret Hideout and Roddenberry Entertainment.