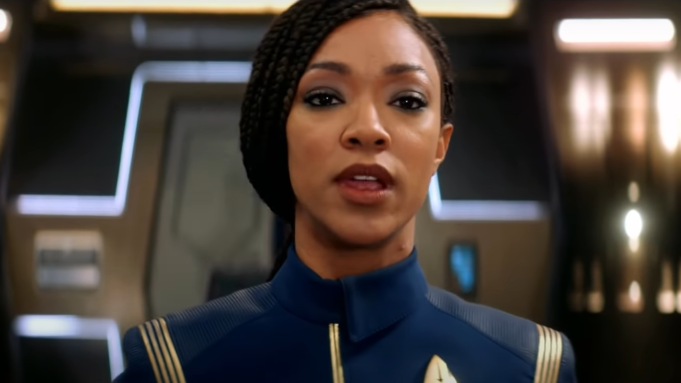 If you’re getting impatient and can’t wait for the Season 3 opener of CBS All Access’ Star Trek: Discovery next Thursday, here’s the first 2 minutes of that episode, in which we see Sonequa Martin-Green’s Captain Burnham coming out of the wormhole cliffhanger of Season 2.

In Season 3, she arrives 930 years in the future, navigating a galaxy she no longer recognizes, while searching for the rest of the U.S.S. Discovery crew. Now living in a time filled with uncertainty, the crew and some familiar and new faces (including the recently announced cast additions Blu del Barrio and Ian Alexander) work together to restore hope to the Federation.

Michelle Paradise, co-executive producer of Discovery, said during the series’ virtual New York Comic Con panel Thursday that the writers settled on 930 years in the future because “it takes us beyond canon, far beyond some stories in Enterprise. This takes us beyond that.”

Doug Jones, who plays Saru, said Season 3 will also explore how “Burnham and Saru are equally capable for the captain’s chair.”

EP Alex Kurtzman gave props to the post-production crew who “took post into their living rooms” during the pandemic to make sure the new season was finished for its October 15 premiere.

As far as the series’ echoes during COVID-19, Kurtzman added, “Michelle and I were shocked about how much the topics (of the show) were so relevant to today.”