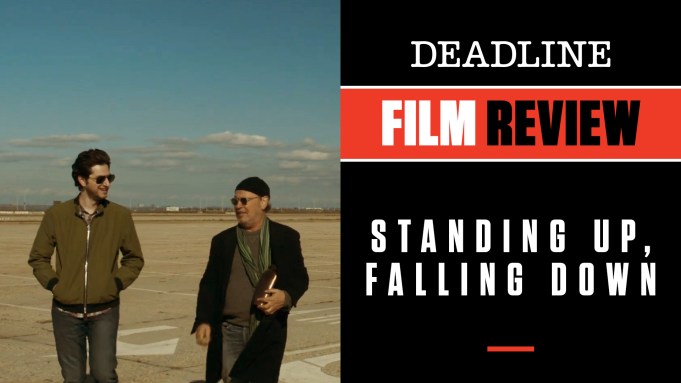 It has been about eight years since Billy Crystal toplined a feature film, 2012’s Parental Guidance, but now he’s back and going all indie on us in the modest but touching Standing Up, Falling Down. Even though this story doesn’t center on Crystal’s character, an alcoholic dermatologist named Marty, this fine human dramedy offers the comedian one of the best turns he has ever had on the big screen and perhaps a new and welcome direction in his movie career.

That said, and despite Crystal’s top billing, this film centers on Scott, played by Ben Schwartz (House of Lies), who happens to be voicing the title role in last week’s box office blockbuster Sonic the Hedgehog.

The comparison ends there as, in this screenplay by Peter Hoare with an assured feature directorial debut by Matt Ratner, Schwartz’s Scott is a failed stand-up comic whose dreams of making it in the big leagues after four years in L.A. have crashed and burned. And, at 34, he finds himself traveling back to Long Island to once again live with his parents (nicely played by veterans Debra Monk and Kevin Dunn). Once there he pines for his ex-girlfriend Becky (Eloise Mumford), the one who got away and now is married to a nice enough guy (John Behlmann) who realizes, in just one scene, that maybe he was her second choice.

Back on the East Coast, Scott has time to deal with all his regrets and is trying to get his life back on track when he has a chance meeting with Marty in a local bar. Marty’s own list of life’s mistakes makes Scott’s pale by comparison. The two strike up a mutual friendship and later meet when Scott’s hives just happen to take him to a dermatologist, who of course turns out to be Marty. The two unlikely new buddies try to help each other through life’s ups, and mostly downs, as other characters weave in and out. They include Scott’s feisty sister Megan (Grace Gummer), her security guard boyfriend (David Castaneda) and Marty’s estranged son (Nate Corddry).

The nifty title explains it all and works on several levels as this bunch searches for second chances and rebirths that, in the sad facts of life, might never come to matching dreams and expectations. There is much here with which to identify, and the writing and acting are exceptional. This is some of the best work of Crystal’s career, an understated but knowing performance that never goes for the kind of easy sentimentality he has sometimes done in the past. Schwartz also hits a career highpoint here with great support from the entire perfectly chosen cast. This is the kind of small but worthwhile film that struggles for attention these days, almost extinct from any significant theatrical exposure and subject to finding wherever you can, likely on-demand in this case but also in select theaters. Seek it out. I say go.

Producers are Chris Mangano, Rick Rosenthal, John Hermann, Gabrielle Nadig, and Ratner. Shout! Studios puts it in release Friday. Check out my video review with scenes from the film at the link at the top of this post.

Do you plan to see Standing Up, Falling Down? Let us know what you think.