Continue to Deadline SKIP AD
You will be redirected back to your article in seconds
Skip to main content
December 23, 2018 3:00pm
8Comments 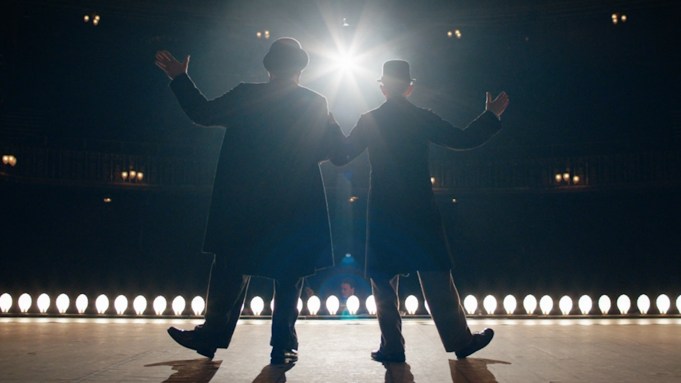 You would probably have to be living under a rock not to have at least  heard of Laurel And Hardy, one of the great movie comedy teams and towering cinematic giants of Hollywood’s golden era. Not only were they screen legends, but after their prime years faded they were rediscovered by new generations in the early days of TV when their old black and white movies were rerun and rerun.  Although some of their film glory is covered in the new film , Stan & Ollie, this charmer with beautiful , right-on-the-mark performances from John C. Reilly as Oliver Hardy and Steve Coogan as Stan Laurel  is not so much about their movies but rather a stage act they did in the 50’s throughout Great Britain.  This was the period near the end of their performing career together, although Laurel, the creative force of the pair was itching to get another film going , a dream project about Robin Hood  even though it seemed like the movie business had passed them by.   This film  from director Jon S. Baird and writer Jeff Pope  is a melancholic affair  as it deals the complex relationship of this team behind the scenes, but also their sheer brilliance on stage and film.

Urged by promoter Bernard Delfont (Rufus Jones)  to take their act on the road and do live shows,the duo gets off to a bumpy start as they play half empty (if that much) houses, a sign that clearly their star has

faded. Eventually as the tour gets closer to London, the word of mouth among fans takes hold and the sell outs begin.  Soon their wives , Lucille Hardy (Shirley Henderson)  and Ida Laurel (Nina Arianda) join up with them and prove to be delightful additions to the proceedings.  The joy of this film comes in watching these expert actors really step up to the plate, nailing familiar Laurel And Hardy routines in recreated film sequences including a sweet song and dance number from Way Out West, but also hilarious and pitch perfect comedy sketches, some from the actual act, and some that were created out of necessity for the film since there is no existing tape on these shows. Stan & Ollie ‘s  strongest ingredient is the inspired casting and teaming of Reilly and Coogan, each nailing their characters in both recreated sequences where its risky as they can be directly compared to the actual movies,  but also in the spirit of this pair who remain lovingly ingrained in the consciousness of true movie fans.

This team was as big as Chaplin, Keaton, Lloyd – you name it – in their heyday, but what Stan& Ollie shows in sometimes a bittersweet way that stardom isn’t always forever.  Hardy died not long after this live 1953 tour at the age of 65 in 1957. Laurel lingered a bit longer before dying largely alone and pretty much forgotten in 1965 at the age of 74. Movies have a way however of creating immortality, and their films live on as well as their legacy, as witnessed by this lovely remembrance of two of the greats.  Reilly has been nominated for a Golden Globe for his performance as Best Actor in a Comedy or Musical, but it seems wrong that he is separated in the category by Coogan, who was bypassed.  Laurel and Hardy were a duo act (although as this film shows that trouble occurred when studio head Hal Roach ( Danny Huston) tried to pair Hardy up with someone else at one point for no good reason – and no success) and Reilly and Coogan in playing them are inseparable , and inseparably great together.  Props also to Rolfe Kent’s wonderful score. The producer is Faye Ward. Sony Pictures Classics puts it into limited release on December 28th, the last release of 2018, but a true year end gift to Laurel and Hardy fans everywhere. It is a gem. Check out my video review featuring footage from the film by clicking the link at the top of this post.

Do you plan to see Stan & Ollie? Let us know what you think.