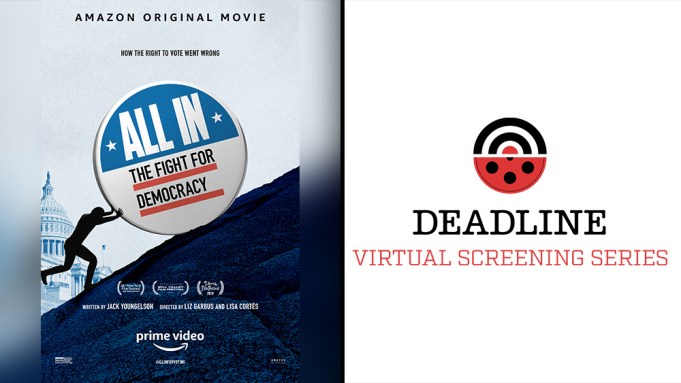 “I think that for so many people that have been victims of voter suppression, they thought it was singular,” says All In: The Fight for Democracy co-director Lisa Cortés on the brutal and conniving forces that try to deny citizens their rights. “What our film does is it places these individuals within this broader context and it shows this kind of targeted weaponization on communities of color, on poor communities,” she adds.

Looking at the past, present and future, both Cortés and co-director Liz Garbus joined us Tuesday night on the eve of Joe Biden and Kamala Harris’ inauguration today for our Deadline Virtual Screening of All In – as you can see in the video above.

“We need that John Lewis Voting Rights Act to be taken back up in Congress to restore the heart of the Voting Rights Act of 1965 that Martin Luther King and his colleagues fought so hard for,” Academy Award nominee Garbus said as America moves into this new era.

Having opened in theaters in the early fall and premiering on Amazon Prime Video on September 18, All In is a passionate and comprehensive examination of the fragility of American democracy, institutional racism and voter suppression. In that sense, timelier this Inauguration Day than perhaps ever before, the documentary is also about the ability people have to take back their Constitutionally given power.

‘All In’ Directors: Stacey Abrams And Georgia Only One Part Of History Of Voter Suppression – Contenders Documentary

Weaved into the bones of the film is Stacey Abrams, the first Black woman to become the gubernatorial nominee for a major party in the U.S. Never conceding she lost the 2018 Georgia race to longtime Donald Trump sycophant Brian Kemp, the legislator did declare voter-suppression measures cost her the victory

Yet, All In is much more than a movie about Abrams and her heroic and dedicated long-term efforts via Fair Fight Action to foster a rising of voters making their voice count.

With “a companion social impact campaign,” as Cortés notes, All In also provides hefty and vital context for how the game has been rigged by those in power. “It was like a 360 engagement in the conversation that made this such a unique experience for us,” the co-director says.

Additionally, All In shows the foundation of Biden’s critical victory in November and turning long-red Georgia blue. On top of that, it offers insight into how newly minted senators Raphael Warnock and Jon Ossoff won their runoff races in the Peach State earlier this month – duel wins that put the upper chamber under the Democrats’ control as of today.

Again, check out part of my conversation with All In directors Lisa both Cortés and Liz Garbus above And Happy Inauguration Day.