Continue to Deadline SKIP AD
You will be redirected back to your article in seconds
Skip to main content
September 28, 2021 3:00pm 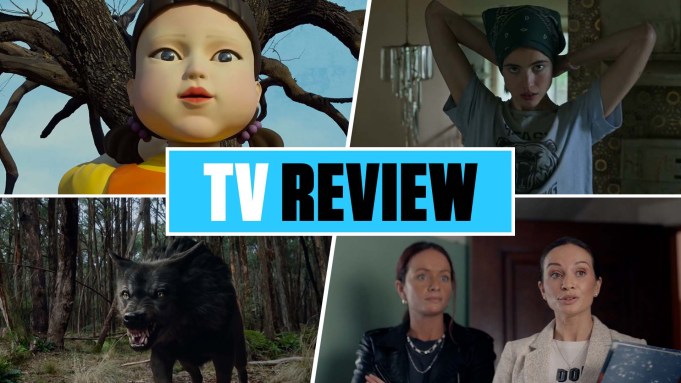 On Monday, Netflix co-CEO Ted Sarandos offered a peek at the extensive data the streamer has on its shows and films with Shonda Rhimes executive produced Bridgerton topping both engagement and viewership lists. Then after allowing the period drama a brief victory glow, the exec predicted that the ultraviolent Squid Game would soon become Netflix’s “biggest show ever.”

But will the series penned and helmed by Hwang Dong-hyuk be the show you have to watch this week? For that answer, you’ll have to watch my video review above.

A competition to the death among debt-heavy people, horror thriller Squid Game debuted on Netflix on September 17. The richly stylized nine-episode Korean series stars Assassination alum Lee Jung-jae, Wi Ha-joon and Money Heist remake’s Park Hae-soo, Squid Game melds a lot of obvious and not so obvious influences in its deceiving simple saga of a desperate crew of 456 individuals willingly playing children’s games with a deadly twist in the hope of snaring the equivalent of $38.7 million. A second season is clearly in the offering after the initial success of the show

Premiering tonight on NBC, La Brea sees a giant sinkhole open up in the middle of LA and the blast radius that ensues.

The heavily promoted sci-fi drama from NCIS: New Orleans alum David Appelbaum probes into not just what is the giant hole on the City of Angel’s Miracle Mile, but what happened to those it swallowed up and those left behind

Set to kick off on Sundance Now on September 20 and debut on IFC on October 4, New Zealand dark comedy Good Grief from sisters Eve and Grace Palmer is already set for a second season on both sides of the Pacific.

Good Grief‘s first season is directed by Kiel McNaughton (The Legend of Baron To’a, My Life is Murder), produced by Angela Cudd (I Am Waru) and Kerry Warkia (Vai, Waru), with much of the same creative team expected to return for Season 2. Produced by the Palmers, plus McNaughton and Kerry Warkia’s Brown Sugar Apple Grunt Productions Ltd, Season 2 is set to start production soon in Auckland and will premiere in 2022 with six episodes expanded to 20 minutes each.

With all those good intentions, which one took the have to watch prize this week? Well, watch the video review above to find out.