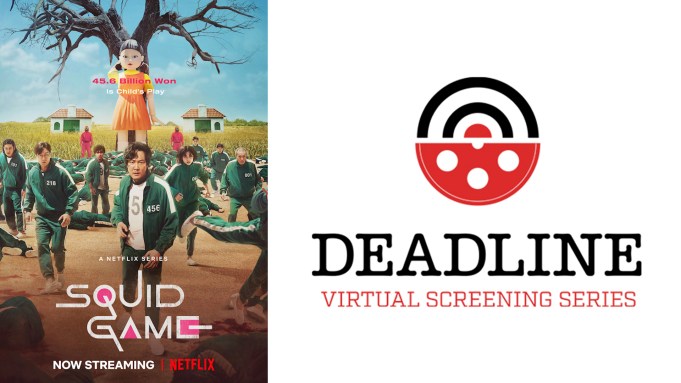 Squid Game has become a giant, global smash hit, reaching more than 142M Netflix households and being streamed for more than 2B hours.

Hwang Dong-hyuk, who created, written, directed and exec produced the nine-part series, tells Deadline during our Virtual Screening Series that the last two months have been an “emotional roller coaster” as he and the cast contend with the success of the series.

The series tells the story of a mysterious invitation that sees 456 participants, all of whom are in dire financial situations, locked in a secret location and forced to play a series of traditional Korean kids games – such as Red Light, Green Light and tug of war – in order to win 45.6 billion won ($38M). However, if they don’t win, they die.

Hwang Dong-hyuk and the cast, including Lee Jung-Jae, who plays Gi-hun, Park Hae-soo, who plays Sang-woo and Jung Ho-yeon, who stars as Sae-byeok, joined Deadline along with production designer Chae Kyoung-sun and music composer Jung Jae-il to talk about the dystopian thriller, respond to internet rumors and discuss the much-vaunted potential season two.

Hwang Dong-hyuk said he was initially a bit worried about the launch of the show but soon after its September 17 premiere, heard it was doing well, particularly in the U.S. “Then it went global and, now seeing all of those people in the Squid Game costumes for Halloween, I’m just getting so many powerful and immense feelings throughout the course.”

Hwang Dong-hyuk and the team were in LA last month to promote the show, and meet with agency reps. “I was having a meal down in Melrose and one of the waitresses knew who I was so she brought me free dessert and I was just amazed. I’m not even an actor, I’m a director, and the fact that they recognize the director, I feel like, yeah, we did make it,” he said.

Lee Jung-Jae said that he first felt pity when he encountered his character. “He lives with his mother who is unwell, he is unemployed, and not because he wants to be unemployed, there are these circumstances that just didn’t allow for him to get a job, and his wife left him, taking his beloved daughter with her, and so, I felt all of this set up was very realistic, he’s very much someone you can see, you know, he’s a common everyman,” he said. “I thought to myself, if we are able to, during the early parts of the show, really make this character a convincing character, able to convince people that he’s not really a bad guy, he’s just someone that you need to understand his circumstances to understand this person. I felt like if we could do that during the early parts of the story, then the rest of the story is going to be able to resonate with a lot of people.”

Jung Ho-yeon said that getting to know her character taught her to care more for others. “Among the many things that I felt attracted me to the character, Sae Byeok, I think it had to do with something that I lacked in real life. That would be the willingness to sacrifice herself, especially for her family, and there is that strong sense of determination for life also, again, not for herself but for others. On so many different levels, I’m truly grateful for having been a part of the show.”

Park Hae-soo said that he looked past the duality of his character. “I really looked into the self-hate, the insecurities that this character had, how he must have been jealous of the character, Gi-hun, who used to be such a close friend when they were younger, and I had many conversations with the director about this aspect of Sang Woo and we also talked a lot about what kind of choices he must have made outside of the Squid Game space in life. You said he is deceptive, and that’s the way I felt when I was reading the script as well, but all I can say is Sang Woo did what he did best.”

Hwang Dong-hyuk also responded to internet rumors that player 001, Oh Il-nam is actually Gi-hun’s father. “That was one of the rumors going on around among the crew on set when we were making this show. They were saying, ‘Oh, he must be a hidden son of Il-nam.’ And there was a rumor that the character Il-nam knew that he was his son, but Gi-hun was unaware of it, so that was the rumor that was going around. That’s my answer, I’m just gonna keep it to myself.”

There has been much talk of a second season since the success of Squid Game. Hwang Dong-hyuk said it would “almost not make sense to not have a sophomore season for something that was loved this much”. He added, “I think that there will be a season two, but as for when that’s gonna be, I think I can’t give you an answer now. I will say though that we are definitely talking about it, so maybe someday, but I don’t know when.”