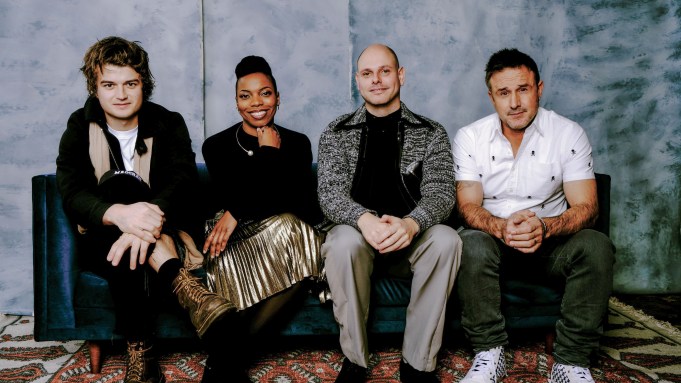 When co-writer Gene McHugh pitched the idea of making a film about a killer rideshare driver, director and co-writer Eugene Kotlyarenko was immediately intrigued. “I said, ‘okay, I can be into it conceptually and aesthetically and I’m like, what is it about?'” Kotlyarenko queried as he wasn’t looking to do a film that was “just pure critique of violence.”

“And then when we seized upon the idea of making it a critique of the attention economy and everyone’s desperation to be validated on social media and stuff.”

Spree, starring Joe Keery, Sasheer Zamata and David Arquette, centers on Kurt Kunkle (Keery), a rideshare driver, thirsty for a following,  who has figured out a deadly plan to go viral. As his disturbing live stream is absurdly embraced by the social media hellscape, a comedienne (Zamata) becomes our only hope to stop the rampage.

Kotlyarenko, who was joined by Keery, Zamata, and Arquette at Deadline’s Sundance Studio, gave his take on how social media has transformed society.

“I think it’s just beyond like negative and positive,” said Kotlyarenko. “It’s just the reality that we’re all forced to deal with every day. So you have to assess it beyond that. Not to say that it isn’t nightmarish, but it’s just like the day-to-day.”

He added, “It’s the new normal for how we interact in most horrific ways and also in ways that can potentially breed empathy or connection.”

For more of the conversation, click the video above.