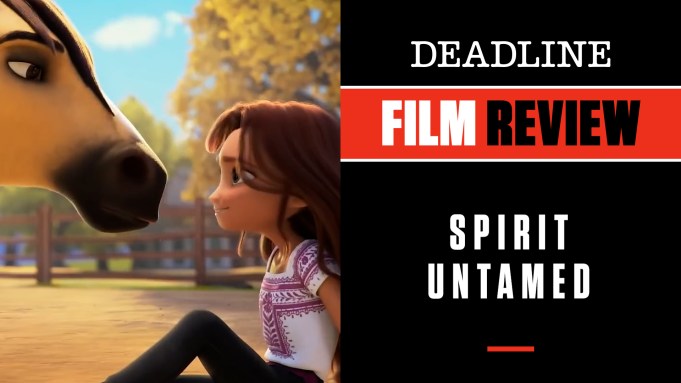 The Oscar-nominated 2002 animated feature Spirit: Stallion of the Cimarron begat the Emmy-winning 2017 Netflix cartoon series Spirit: Riding Free, which now has begotten the animated feature Spirit Untamed. DreamWorks has a way of maximizing potential of its various properties by turning them into franchises one way or another, so instead of the beautifully 2D-animated original feature film, the 2021 cinematic sequel the studio has dreamed up is more like an origin story of the series — and one that more comfortably fits in the CGI mold of today’s more commercial feature toons.

It also is female-driven, not only in terms of story but also behind the scenes, re-emphasizing that its target audience undoubtedly is young girls. As a film with a strong message and a nice heart, Spirit Untamed is hardly the edgy entertainment its title might indicate but rather a sweet story of a feisty girl who meets her soulmate in a horse, both determined to gallop to their own beat.

At the center of the tale is Lucky Prescott (voiced by Isabela Merced). Her mother Milagro (Eiza Gonzalez), a true horseperson who tragically died, sees her spirit reignited in the daughter who was sent to the East Coast to live with proper Aunt Cora (Julianne Moore), who finds she cannot be tamed by that environment and decides to bring her back west to the railroad town of Miradero, where her father Jim Prescott (Jake Gyllenhaal) lives. But he is quite awkward in dealing with the idea that he is suited to bring up Lucky in a way she deserves. It is a dicey dance to be sure, but Lucky makes the most of it upon arrival and quickly finds kindred spirits in Pru Granger (Marsai Martin) and lively Abigail (McKenna Grace) as the horse-riding duo welcome Lucky into their ranks — especially after she has befriended and impressively calmed down uncontrollable Spirit, the horse that seemingly cannot be tamed.

Of course, you need a villain for any animated flick worth its salt, and he comes in the form of a heartless horse wrangler (Walton Goggins) determined to round up all the free wild horses who roam near Miradero, including Spirit. That is exactly what he and his motley crew do, capturing them all and loading them up to be sold for whatever and to whomever. Lucky, with the aid of her friends, finds this unacceptable, and thus the fight to free them begins.

All of this is harmless entertainment that its target audience will eat up because it falls squarely into a winning movie tradition and has a plucky young heroine with whom they can identify. After all the decades of boy-driven stories set in the wild West, it is refreshing to see the girls get their turn (how long has it been since National Velvet?). And that is exactly what Spirit: Riding Free writer Aury Wallington and Kristin Hahn (Dumplin’)have in mind, along with their director Elaine Bogan and producer Karen Foster. Adding to the substantial girl power on display here is a luscious musical score from Amie Doherty, including a terrific song called “Fearless.”

All the voice work, including Andre Braugher as Pru’s dad, is perfectly pitched here, a step above the TV show if not quite up to the artistry of the original film. There is something comforting about this spirited slice of family entertainment that hits a spot needed right about now — a girl-and-her-horse movie for the new age. Universal releases it in theaters Friday.

Do you plan to see Spirit Untamed? Let us know what you think.