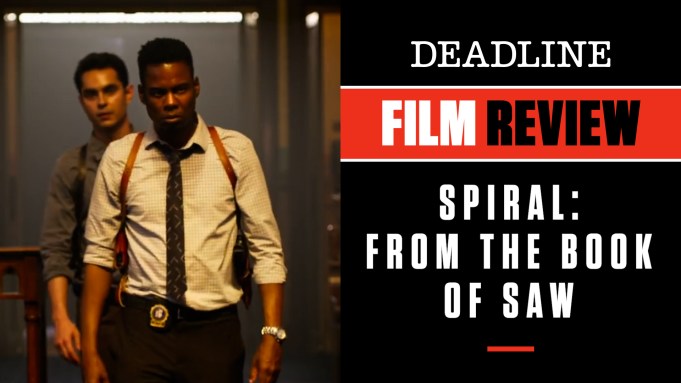 With Spiral marking the ninth entry in Lionsgate’s Saw horror franchise, the surprise isn’t the continuing novel and gross ways writers invent to brutally kill human beings but that an A-list cast including Chris Rock, Samuel L. Jackson and Max Minghella would sign on to be a part of it. That is because this is a franchise, started in 2003, that pretty much wore out its welcome with Jigsaw, the eighth and not-well-received 2017 iteration of the venerable series.

With Saw’s star attraction now killed off, where do you go — especially when the audience seemed to be tiring of it all as well? Enter superfan Rock with a pitch to reinvent it — not as a sequel, per se, but a whole new take. The comedian is said to have encyclopedic knowledge of everything and anything Saw, and wouldn’t it be interesting if he sat front and center in a new version? That is just what has happened as veteran series director Darren Lynn Bousman (Saw 2, 3 and 4), writers Josh Stolberg and Peter Goldfinger (Jigsaw) and original producers Oren Koules and Mark Burg all came back to the drawing board to craft Spiral, which presents the idea of a police procedural merged with all the familiar “traps” fans, including Rock himself, would expect to see in any movie claiming to be “from The Book of Saw.”

It doesn’t take long to figure out we are back in the comfort of torture porn, the lexicon that helped define this horror subgenre, as a police detective chases a colorfully dressed suspect down into the bowels of the subway tracks only to be captured and “trapped” himself by a mysterious figure looking like Jigsaw 2.0. With an altered voice and sick pig mask, he uses digital technology to tell the cop — who is shackled on the train tracks with an elaborate, medieval-style device squeezing blood from his tongue — that he has a choice to let the tongue be cut out or die when the subway car comes right at him.

Fans, you can rest assured it is just the first grisly death in the flick, with about five more cleverly grotesque traps dropped in like numbers in a musical. But these set pieces are definitely nothing to sing about.

Cut to the police station and Rock’s Detective Zeke Banks is regaling colleagues with his twisted take on Forrest Gump, a comic interlude that looks and feels like it could have come straight out of an early Rock stand-up routine. Lest you think the Saw franchise has been turned into a vehicle for Rock’s comic antics, think again. In no time, we see the serious side of this guy as he and partner and detective-in-training William Schenk (a scene-stealing Minghella) are picking up the grisly pieces left behind in the subway and setting out on an investigation that quickly turns into a search for a serial killer they fear is a “Jigsaw copycat.” And then it becomes clear that the teasing perpetrator is out for the blood (and other body parts) of corrupt cops he is targeting for unjust killings.

Under the guise of a Jigsaw-like revival, the traps keep coming — fingers and skin removed, boiling wax, breaking glass shot in continuous rounds — and the cops keep dying horrible deaths. Meanwhile, Zeke’s obsession grows greater as he probes the murders and finds himself personally caught up in a very bad deal, including one scene literally involving a saw.

On top of the most recent season of Fargo, in which he plays a 1950s crime-family boss, Rock acquits himself nicely in a largely dramatic role, clearly relishing the opportunity for a change of pace. Opposite him, Minghella (The Handmaid’s Tale) shows why he continues to be a real talent to watch. And then there’s the inimitable Jackson, who plays Zeke’s legendary retired police-chief father and, though in just a supporting role, shows why he is a star who commands the screen in just about any scene he’s in. Marisol Nichols as Captain Angie Garza also makes an impression in more ways than one.

Fans won’t be disappointed and will want to line up for this one, and though the film is far too violent and gross for the weak of heart, Rock, Jackson and Minghella up the game for the franchise in ways that would signal a better than even chance for a 10th chapter from the Book of Saw. Check out my video review with scenes from the film at the link above.

Do you plan to see Saw? Let us know what you think.