Continue to Deadline SKIP AD
You will be redirected back to your article in seconds
Skip to main content
December 17, 2019 1:12pm 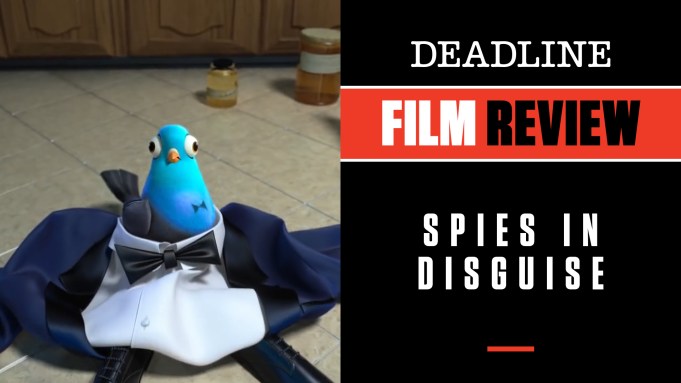 Let’s get it straight right away: When I went to see the new Fox/Blue Sky animated film Spies in Disguise, I was not expecting a whole lot, despite a pretty interesting and eclectic voice cast and a great title. The fact that Disney, king of the toons, inherited this as part of its takeover of 20th Century Fox meant to me that probably this was a stepchild the studio was unloading just five days after releasing its latest Star Wars juggernaut to keep it hidden in the holiday rush of movies. How wrong I was.

This movie, marking the feature directing debut of veteran animators Troy Quane and Nick Bruno, is riotously funny, a true animated holiday treat for the whole family that is pure entertainment from start to finish. Will Smith as superspy-turned-pigeon Lance makes for the coolest of spies and the perfect pigeon (I will get to that). Tom Holland as nerdy scientist and gadget creator Walter is the perfect match for a team that delivers nonstop laughs and lots of action. I mean, James Bond never had it this good.

I hesitate to call this flick a cartoon since they really only go by “animated’ these days, but I have to say it is in the spirit of great cartoon creations from the likes of Looney Tunes, Tex Avery, Walter Lantz, Chuck Jones and so on. There is no attempt to be anything other than funny, and I laughed out loud more frequently than in any other toon this year. It also happens to be the best Will Smith movie in eons. But don’t call it a “spoof” of spy films, Spies in Disguise is just an homage and an animated version of one, crazy as the plot is.

Lance is an egocentric superspy working for an agency run by the tough-as-nails Joy (Reba McEntire in offbeat casting that works) when he is accused of stealing the M-9 Assassin Drone and immediately has gone from superstar to super-wanted. The thing is, he didn’t do it — but an evil villain named Killian aka Robohand (a creepy sounding Ben Mendelsohn) is able to turn himself into Lance’s doppelganger and thus is the real culprit. Needing to get to the bottom of it, Lance turns to Walter and his crazy gadgets and inventions, accidentally imbibing one formula that turns him into a pigeon. This is appropriate in the surroundings since Walter’s faithful companion happens to be a real pigeon named Lovey. The only problem is that Walter has not figured out how to reverse the deed, so Lance is stuck, thus the title. With the help of Lovey and other like-minded birds, he goes on the trail of Robohand in order to clear his name and save the world, as it were.

The rest of the cast is smartly chosen, including Rashida Jones and Rachel Brosnahan. Smith really knows how to punch across the comic gags, especially in pigeon form, and Holland is ideally cast here as well. It all has the cool look of a ‘60s-style spy movie, with a perfectly pitched score by Theodore Shapiro and soundtrack from Mark Ronson. Blue Sky is responsible for all the Ice Age movies, among many others, and it has topped itself with this one. There is lots of frenetic action, and I know it sounds dumb, but I’m betting that your kids and you will have a great time.

Check out my video review at the link above with scenes from the movie.

Do you plan to see Spies in Disguise? Let us know what you think.