Continue to Deadline SKIP AD
You will be redirected back to your article in seconds
Skip to main content
December 10, 2018 7:17pm
8Comments 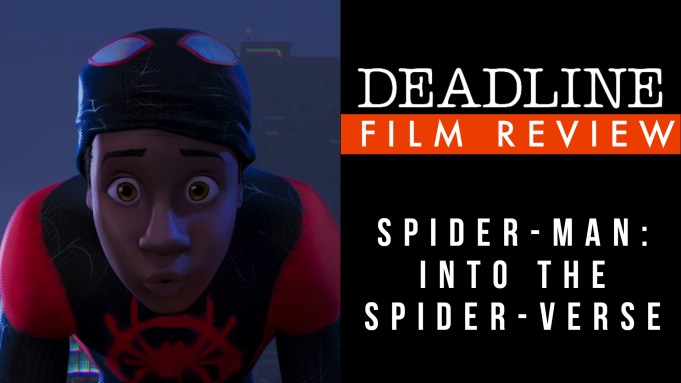 Leave it to Phil Lord and Chris Miller to spin this web into movie gold. With Spider-Man: Into the Spider-Verse, the team behind The Lego Movie, Cloudy With A Chance Of Meatballs, and the live action 21 Jump Street turn out to be the perfect creatives to bring a wholly new take on Marvel and Sony’s cash machine, taking the live actions films (including the very good and most recent installment Spider-Man Homecoming) and leaving them in the dust in a burst of animated magic that not only is one of the most entertaining films of the year, but also perhaps the most diverse, exciting, funny, clever, and just plain fun films in some time.

Employing a groundbreaking visual style that starts out with CGI and then adds a layer of hand-drawn animation over each frame, this unique process results in the look of the actual comics and graphic novels in ways we haven’t quite seen before. Lord and Miller, along with their creative team including a trio of directors (Rodney Rothman, who also co-wrote with Lord, Bob Persichetti, Peter Ramsey)  also invests this story in a twisty clever fashion basing this edition on a 2011 comic that dared to risk offending fans by creating a new multi-universe of Spider-mans, not just one but several very distinct versions of the character, starting with Peter Parker (voiced by Jake Johnson) who is said to have died at age 26 but….. At any rate, he takes our new central Spidey, Miles Morales (voiced by Shemeik Moore), a 13-year-old Afro-Latino teen who gets the bite and suddenly is thrown out of whack, not knowing what to do with his new superpowers. Parker emerges to mentor him, teach him to soar, and deal with Peter’s own jumbled life at this point. There is also Spider-Gwen (voiced by Hailee Steinfeld), giving girl power a real platform here; a Humphrey Bogart-style Spider-Man Noir (voiced by Nicolas Cage) who is a sea of black and white in a colorful world; Spider-Ham (John Mulaney), a Looney Toon-style comic character that steals every scene he shows up in, and more. Much more.

There are numerous other characters in the mix including a cop named Jefferson Davis (Brian Tyree Henry) who is Miles’ dad, along a terrific voice performance from Mahershala Ali as Uncle Aaron, someone Miles looks up to in a big way. Lily Tomlin delightfully takes on the voice of Aunt May this time and gives it an extra dose of adrenaline. There is also the villain of course, and in this case, it is Wilson Fisk (a menacing Liev Schreiber), an evil figure as tall as he is wide. Of course, he is up to no good, and Miles and crew must rise to the occasion to stop him before it is too late.

But plot aside, the joy is in the details and this is one studio-bred hoped-for-blockbuster that also isn’t afraid to take chances and get a little gritty in the telling of this tale, which ultimately has an inspiring message that we all wear the Spider-Man mask in one way or another, that we have the power to do good. That is a perfect message for the season. The film also serves as a poignant swan song for creator Stan Lee’s Marvel cameos, with maybe the best one yet, an animated turn that adds a touch of beauty to this film (Lee died earlier this Fall at 95). A big shout out as well to Daniel Pemberton’s ambitious and cool score.

Do you plan to see Spider-Man: Into The Spider-Verse?  Let us know what you think.