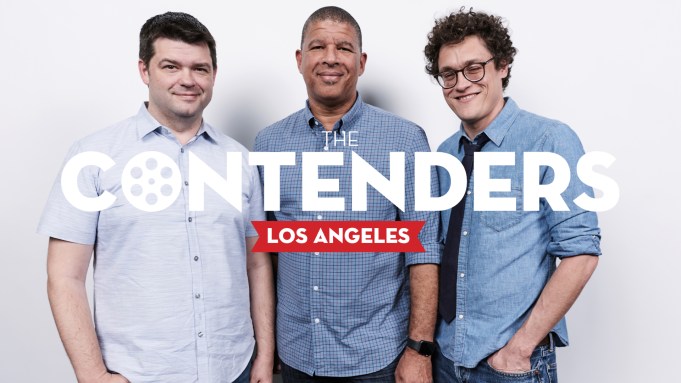 Spider-Man has been portrayed by three actors (Tobey Maguire, Andrew Garfield and Tom Holland) in eight live-action films since 2002. The iconic hero returns to the big screen next month in Sony’s animated Spider-Man: Into the Spider-Verse, but once again there’s been a change-up.

This time, Nicolas Cage will portray Spidey. As will Jake Johnson and John Mulaney. Same goes for… Kimiko Glenn and Hailee Steinfeld? In fact this film is absolutely crawling with Spider-Mans. Blame it on the scheming Kingpin (Liev Schreiber), who ripped a hole in the fabric of reality. The resulting rift sucked in Spider-Mans from alternate dimensions who vary in age, gender, life events and other profound ways. How profound? Well, Mulaney portrays a talking swine who calls himself Spider-Ham.

The off-the-wall concepts are matched by the film’s stylized animation, which blends old-school hand-drawn craft and vertiginous perspectives with hip-hop and graffiti influences. All of it was the brainchild of filmmakers Phil Lord and Chris Miller, the duo behind The LEGO Movie (2014) and Cloudy With a Chance of Meatballs (2009).

On the DGA Theater stage recently for Deadline’s annual The Contenders Los Angeles event, Lord explained the film’s rebel spirit as a commitment to delivering a movie that was fresh in every way.

“This is all an opportunity to figure out how to tell the story in a novel way,” Lord said. “What’s so cool is that animation and cinema have grown up together. So we tried to make the most cinematic animated film that we could. The source material is so cinematic. We are all people who grew up with comics and sequential art and it informed our interest in animation.”

Miller said another goal was to break away from the standardized look of many CG-animated films now, which have soft light and flattened visual personality: “It a real groundbreaking move to have this as both 3D and 2D and it’s a really innovative thing. It was four times harder to make a frame of this movie than any standard CG film. And if you freeze any frame it looks like a painting come to life. The artistry in it is spectacular.”

Lord and Miller were joined by Peter Ramsey, one of Spider-Verse’s three directors. The Rise of the Guardians director’s interest was energized by the choice of its central character: Miles Morales, a comic book character introduced in 2011, instead of Peter Parker, a product of the JFK era.

“The big question everybody asks themselves when the idea of this probably first came up is: Why another Spider-Man movie? I mean, know I asked that,” he said. “Part of the reason was to introduce Miles… He’s half-African-American, half-Puerto Rican. He represents kind of a new face — pretty literally — on the myth of Spider-Man, but also a way to talk about ‘What does this myth mean?’ We look at it as a myth the can be told in different ways.”