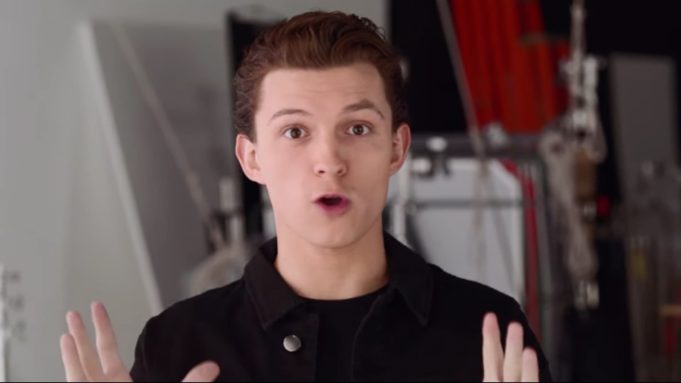 Tom Holland issues a maybe first of its kind warning at the start of this new trailer for Columbia Pictures’ Spider-Man: Far From Home. The warning? Don’t watch.

At least, don’t watch if you haven’t seen Avengers: Endgame, since, he says, the Spider-Man trailer contains spoilers. So with that in mind, this post comes with the same warning – Don’t watch the trailer if you don’t want spoilers.

“Following the events of Avengers: Endgame, Spider-Man must step up to take on new threats in a world that has changed forever.”

Couple non-spoilery observations: The trailer description notes the use of the Ramones punk classic “I Wanna Be Sedated,” but you’ll have to listen pretty hard to pick it up. More obvious is an instrumental version of the Spider-Man cartoon theme song from the ’60s (..”does whatever a spider can”).

The last Spidey trailer – a teaser, to be accurate – scored 130 million views in its first 24 hours. Guessing even a warning from Tom Holland won’t slow this one down much.

Like the teaser, the new trailer shows Peter Parker taking off to Europe with his classmates for a much needed vacation, a plan that falls apart when spymaster Nick Fury (Samuel L. Jackson) recruits the young traveler to fight monsters on the loose in Europe. The trailer also introduces Jake Gyllenhaal as Mysterio, a character whose motivations are as enigmatic as his name.