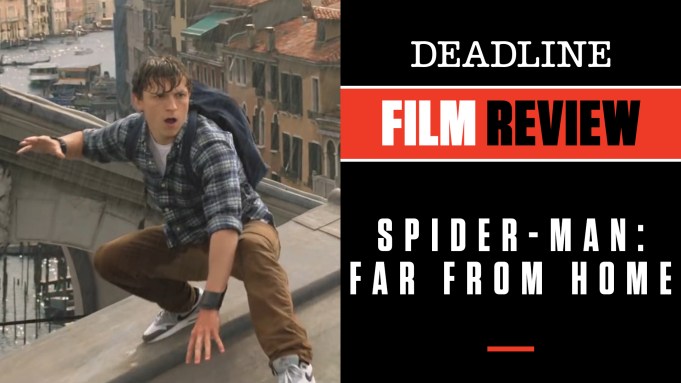 The big question is, does Spider-Man still have cinematic mojo after surviving Avengers: Endgame  and a critically acclaimed animated spinoff that won an Oscar? The answer is, sure why not? With audiences exhausted by the Marvel brand in the first six months of 2019 — not just by Avengers: Endgame, which Disney rereleases Friday, but also Captain Marvel — along comes Spidey again, but with an inspired idea of shipping him off to Europe for a summer vacation with his high school mates in order to get over the effects of “the blip,” the catastrophic event that wiped out half of earth for five years including Peter Parker himself.

The kid needs a break and so do fans who want to see the Marvel Cinematic Universe continue. What better than a picture-perfect travelogue that takes our hero and pals from Venice to London, Berlin, Prague and The Netherlands on a trip of a lifetime. Of course just in case, sweet Aunt May (Marisa Tomei) has packed away his work clothes (i.e., Spider-Man tights) for any unforeseen unfortunate situations this kid’s superpowers might help while taking a whirlwind European tour. Of course, this being a summer comic book superhero movie, you know it won’t take long. Think of it as If It’s Tuesday, This Must Be Armageddon.

I really liked the new incarnation of Spidey when it was rebooted, post Tobey Maguire and Andrew Garfield, into a more age-appropriate take on the iconic comic book about the web-slinging teenager who becomes a hero after being bitten by a spider. Casting Tom Holland was key, and he and the whole high school ambiance really makes it work. He was terrific in Spider-Man Homecoming, and even better in this sequel because he has clearly gotten more comfortable in his skin (tights). He’s also dealing [a spoiler alert for those who still haven’t seen Endgame] with the loss of his mentor Tony Stark, as the Robert Downey Jr. Iron Man character sacrificed himself for the good of the planet in the Avengers finale. Far From Home actually starts with a primitive student newscast which offers an In Memoriam segment to those Avengers who perished, notably Tony, also explaining how the ‘blip’ wiped out so many earthlings only to see them, like Spidey, resurrected five years later.

With all that in his recent past, it’s no wonder Peter wants to just hang out with friends and hook up with MJ (Zendaya), for whom he now has a rival in the form of a much younger student named Brad (Remy Hii), who came back from the blip actually five years older and determined to get Peter out of the way of his own romantic plans.  He’s on the trip, along with buddies Flash (Tony Revolori), Ned (a hilarious Jacob Batalon) and Ned’s steady Betty (Angourie Rice). The chaperone played by Martin Starr tries — comically — to keep them all in line.  A scene where they upset the seating chart on the plane is a riot.

Once the gang hits Venice, though, big trouble starts as a giant blob-like water creature sets a path of destruction and danger, forcing Peter into some instant action without the benefit of his suit. To the rescue comes Mysterio, aka Quentin Beck (Jake Gyllenhaal), a hero from an alternate Earth who befriends Peter and fends off disaster. Sony has asked critics not to elaborate on this character or his motivations, so I won’t offer spoilers other than to say Mysterio is a good name for him as you are never quite sure just what is  motivating him. In Gyllenhaal’s frenetic hands though it works in an amusing manner, and certainly those who come with comic book knowledge probably are ahead of the game.

With all this activity the last thing Peter wants is any more pressure to save the world, but that is exactly what he gets from Nick Fury (Samuel L. Jackson) and his associate played by Cobie Smulders, as they lure the very reluctant Stark protége back into action on assignment in Prague, where all hell seemingly breaks loose and the so-called Elementals are rampant.  It is pretty much this way throughout as the movie operates on the level of a teen flick combined with a superhero movie full of mind-bending visual trickery and lots of CGI effects. A key gift from Tony comes into Peter’s hands when he is left Tony’s signature glasses, a multibillion-dollar Siri-like device named Edith that in the wrong hands could wreak havoc in an instant, as we first see when Peter tries Edith out in order to get rid of Brad.

Jon Watts, who so capably steered Homecoming into new fresh territory, returns here, and even though he lays on too much action, his sharp filmmaking style — as first noticed in a terrific indie called Cop Car — is apparent. The screenplay gets some nice zingers from writers Chris McKenna and Erik Sommers, but the movie belongs to Holland, who gives Peter Parker/Spider-Man real human qualities, an emotional connection and the feel of a young man confused by the powers and legacy thrust upon him. Among the rest of the supporting cast it is awfully nice to see the return of Happy (Jon Favreau), a further poignant reminder of the man who is missing for the first time in the MCU. Stay to the end through all the credits of course — it ain’t over until it’s over.

Producers are Kevin Feige and Amy Pascal. Sony releases it domestically on July 2. Check out my video review above that also includes scenes from the movie.

Do you plan to see Spider-Man Far From Home? Let us know what you think.