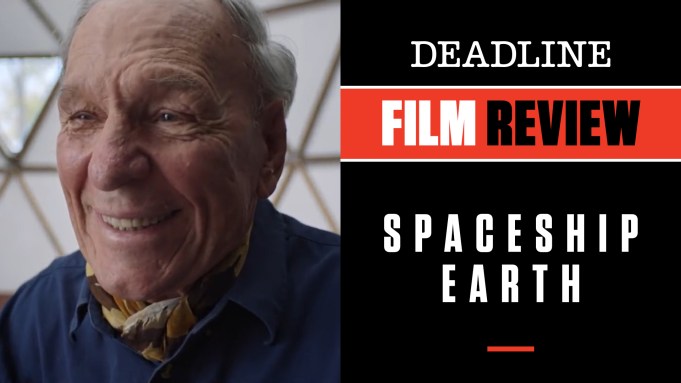 Spaceship Earth is a new documentary about the two-year experiment in which eight members of an experimental theater company embarked on a grand mission to quarantine themselves in a large glass vivarium called Biosphere 2. The film is unexpectedly timely as many of us find ourselves in our own quarantine quandary, but I can guarantee you it is nothing like the carnival atmosphere this one was.

Director Matt Wolf takes us back to 1991 — September 26, to be exact — when it all started, using a mix of the bountiful supply of archival and news footage as well as new talking-head interviews with the hippie-ish counterculture pioneers who undertook this unique mission. They existed in a controlled environmental space for two years, with supposedly no direct physical contact with the outside world. This was all the brainchild of a true believer named John Allen aka Johnny Dolphin, a climate-change zealot before his time. He recruited members of a unique theatrical troupe to don matching red jumpsuits; take on nicknames like Salty, Flash and Horse Shit; and take two years of their life to try and prove that Earth could be re-created, perhaps even readied to move to another planet, by living and thriving in this self-contained unit.

off The press and the world seemed to lap it all up, a true adventure that drew massive coverage — and massive cynicism in some quarters from those who saw it as a big publicity stunt, or the expensive endeavor of a cult. In fact, it wasn’t cheap, costing $150 million to pull off, largely funded by Texas businessman Ed Bass and whatever sponsors could be found. And there was all sorts of controversy that cropped up along the way, including a revelation that outside air was being pumped into the thing. One resident accidentally cut her finger and had to leave temporarily to get treated. She came back in with a couple of non-descript bags that caused much consternation about their contents and whether she was cheating. This was, after all, supposed to be completely self-sufficient. Was it? See this somewhat compelling film and decide for yourself.

Wolf opens the movie as the group of eight are making their grand entrance into the biosphere (which remains a tourist attraction in Oracle, AZ, but is closed for the time being due to the pandemic),. He then spends the first half of the movie explaining how they got to this moment in time, largely through carefully chosen footage and particularly new talking-head interviews. It proceeds pretty much by the numbers, failing to rise above your average linear documentaries. But it really picks up in its second half, as conflicts arise, questions are asked, and we see it kick into action. And in something that could be filed under “stranger than fiction,” who shows up to save the day? None other than future Donald Trump acolyte Steve Bannon — yes, that Steve Bannon — who Bass brings in after conflicts with Allen and in need of a financial manager to put it all back on track, or perhaps doom the whole project.

This film is far from the 1996 Pauly Shore comedy, Bio-Dome, but it is no less incredulous at times. For that, this Neon release is worth checking out, especially if it is all new to you or if you want to see if this scientific experiment still has real pertinence for today, perhaps even more. It couldn’t come at a much better opportune time, that’s for sure. You can find it on VOD and digital now. Check out my video review with footage from the film at the link above.

Do you plan to see Spaceship Earth? Let us know what you think.