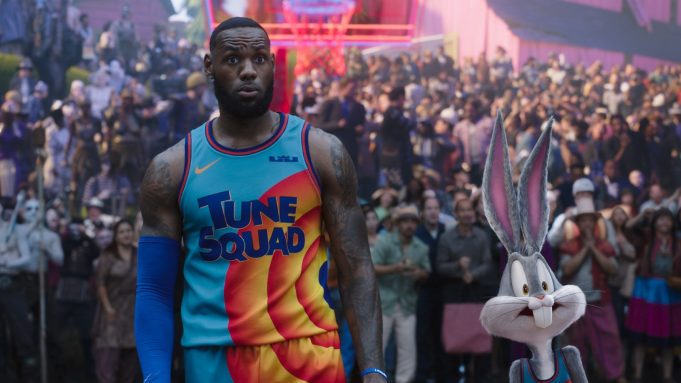 NBA champion and global icon LeBron James embarks on an epic adventure, alongside the Looney Tunes, in the first official trailer for Space Jam: A New Legacy.

Released on Saturday, the trailer picks up with James as he’s encouraging his son, Dom (newcomer Cedric Joe), to follow in his footsteps in basketball. Unfortunately, his son wants to pursue his own path, and subsequently, James is thrust into “The Serverse,” a bizarre digital space unlike any he’s experienced before.

“What in The Matrix hell?” he says, as he’s introduced to Al-G Rhythm, the evil computer algorithm played by Oscar nominee Don Cheadle, who takes his son away.

“Welcome, King James. I am the king of this domain,” the algorithm says. “The only way you’re getting your son back is if you and I play a little basketball.”

Naturally, James must then assemble “an elite team” to ensure the safe return of his son, finding it in Bugs Bunny and his Looney Tunes pals.

In the the live-action/animated sports comedy, James must then defeat Al-G-Rhythm’s digitized Goon Squad. The film will reveal just how far some parents will go to connect with their kids.

As revealed in the trailer, the athlete comes across a number of other major Warner Bros. characters, in his journey through The Serververse, including The Iron Giant, The Flintstones and King Kong.

Distributed worldwide by Warner Bros. Pictures, the Proximity/The SpringHill Company production will be released in theaters nationwide on July 16, 2021. A New Legacy will also be available in the U.S. on HBO Max for 31 days, beginning on the 16th.

Check out the first official trailer for the film above.