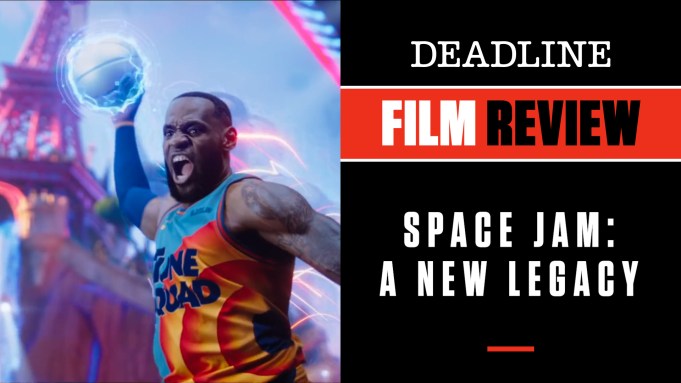 I could tell by the extensive party layout Warner Bros created for Monday night’s world premiere of Space Jam: A New Legacy that not only are big Hollywood premieres are coming back but the studio is high on the prospects for this LeBron James update of the hit 1996 original Space Jam that teamed Michael Jordan with the eternal animated stars of the studio’s prized Looney Tune franchise. Even though it is essentially almost a remake of the original for the technological age, the pairing of a new basketball legend with some legendary cartoon icons still has it. There is a reason Jordan’s version made $250 million worldwide, and I wouldn’t be surprised to see A New Legacy find equal success.

James, playing himself with a natural charm, is a father of three including son Dom (Cedric Joe), who tells his disappointed dad he would rather attend a video game design camp than follow in his iconic father’s footsteps on the court. In an effort to connect with Dom, LeBron takes him to a meeting with the digital team at Warner Bros, who are pitching him on new technology that can integrate the hoops star remarkably into all sorts of media. But LeBron turns it down, which enrages the maniacal leader of Warner’s ServerVerse, a guy named Al G. Rhythm (Don Cheadle) — get it?

Al G manages to lure LeBron and son into the ServerVerse in a kidnap plot that sends them swirling into Looney Tunes World, an animated universe from which there could be no return — unless LeBron can take Bugs Bunny and gang, turn them into a crackerjack basketball team and defeat the new version of the Goon Squad, a digitally enhanced collection of hoops greats brought to life in an imposing form, to say the least. Part of the fun also is seeing so many other iconic (Warners-owned) movies represented as well (Mad Max Fury Road being just one). Of course the main attraction, dealing with Bugs, the leader of the pack, along with favorites including Sylvester, Tweety Bird, Yosemite Sam, Daffy Duck, Porky Pig, Elmer Fudd and Foghorn Leghorn, is no easy task. They didn’t get their reputation for out-of-control shenanigans for no good reason. This is a tall task, but LeBron is ready to take them to the big game in order to put his own family back together and be a hero to his son, who wants to follow his own dreams.

All the right messages are here, and director Malcolm D. Lee (Girls Trip) has merged the live action and animation elements together in delightful fashion, though really no more effectively than in the original. James isn’t headed to the Oscars for this performance any time soon, but he acquits himself nicely as himself. The real acting honors belong to Cheadle, who seems to be having a blast playing the heavy. Joe is fine as Dom, as are the other live-action stars including Khris Davis as LeBron’s buddy Malik and Sonequa Martin-Green as Mrs. James. Jeff Bergman takes on Bugs, Sylvester and Yosemite Sam vocal duties among others, while Eric Bauza supplies the often-witty lines for voice-over work on Daffy, Porky, Elmer and Foghorn. Zendaya turns in a pleasant VO job on Lola Bunny, and Bob Bergen nails Tweety. Look for Ernie Johnson and Lil Rel Howery calling the big game, and there also is a hilarious cameo appearance from a different Michael Jordan in one of the film’s best gags.

I have to admit I am a sucker for all this Looneyness, and it is great to see the crown jewels of Warner Bros’ storied animation history still getting work (in both classic and CG style) on the big screen (and small). The studio releases Space Jam: A New Legacy on Friday in theatres and on HBO Max. Sure, the plot is pretty much the same, as is the big game where the opponents were space aliens morphing into hoops legends, but hey, it all still works, and King James paired with King Bugs is a big part of the reason it does. Producers are Ryan Coogler, Maverick Carter, Duncan Henderson, and James. Check out my video review with scenes from the movie at the link above.

Do you plan to see Space Jam: A New Legacy? Let us know what you think.