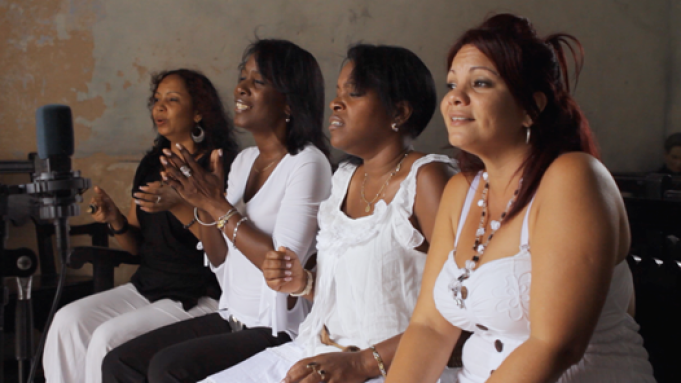 Next week, all-female Cuban quartet Vocal Vidas re-enters the spotlight, in the SXSW-premiering documentary, Soy Cubana, a taste of which is provided in the clip above.

Directed by Jeremy Ungar and Ivaylo Getov, the film is based on an award-winning short of the same name, which debuted at the Santa Barbara International Film Festival in 2016. While the former project put the singular a capella quartet on the cinematic map—examining their day-to-day lives, their creative process and the roots of their Afro-Cuban sound—the feature picks up with them, as they look to fulfill their dream of performing in the United States.

“As soon as we met the Vocal Vidas, we became as captivated by their infectious personalities as we originally had been by their sound,” directors Ungar and Getov said in a statement, ahead of the film’s world premiere. “That said, we never could have anticipated the connection we’d develop with our subjects, nor the six-year long journey to come, ultimately following the Vidas to the U.S.”

The opportunity for Vocal Vidas to bring their music to the States in 2017 occurred partly as a result of the success of Ungar and Getov’s original short. While the group was invited to perform at a number of L.A. venues, their overseas journey culminated in a concert before an audience of 3,000 at Downtown LA’s Grand Performances.

But given larger sociopolitical happenings at the time, the journey the Vocal Vidas would embark on to accomplish their goal would not be an easy one. “As we prepared for their U.S. tour, the political situation between our two countries changed drastically: the Trump administration began the process of shutting down diplomatic relations, effectively closing the US/Cuba border,” the Soy Cubana directors recalled. “This huge and unforeseen shift threw the ability of the Vidas to enter the U.S. into turmoil, and motivated us as filmmakers to provide a specific window into what abstract geopolitical relationships mean for real people caught in the middle of them.”

Ultimately, the filmmakers noted, “Films don’t choose their moment.” But sticking to their mission to bring their Vocal Vidas feature to life, they’d go on to discover “a story that speaks to our moment.”

“[It’s] a film about crossing borders; about the capacity for human connection. A film with something to say about America: the country we ideologically hope to live in, and the one we currently inhabit,” they added. “And in sharing a film about large-scale live performance, we hope our movie serves as a lifeline to the soul, as we pass the grim marker of a year under lockdown.”

Written by Getov, Ungar and Agustín Rexach Martín, and produced by Robin Miller Ungar, Soy Cubana’s documentary subjects include Ana Josefina Hernández, Marvoris Mena Faez, Koset Muñoa Columbié and Annia del Toro Leyva. At 10 AM CT on Wednesday, March 17, the pic will debut in the 24 Beats Per Second section of SXSW, which, per the festival, spotlights “the sounds, culture and influence of music and musicians, with an emphasis on documentary.”

Subsequently, at 7 PM CT on March 19, the Vocal Vidas will appear for a music festival concert presentation. Beginning March 20, the performance will be made available for on-demand viewing, exclusively on SXSW’s paid channels.

For a sense of the intimacy and camaraderie that informs the music of the Vocal Vidas—a group that is looking “to make history”—check out the clip above.