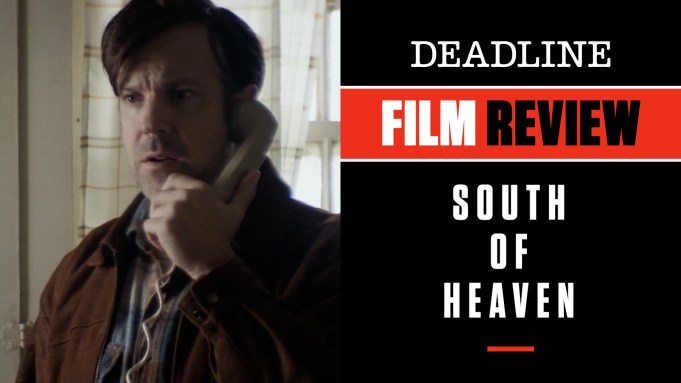 The title South of Heaven means some kind of hell for parolee Jimmy Ray in director Aharon Keshales’ noirish genre action drama that brings star Jason Sudeikis a film role that is well south of his current success in Ted Lasso. This film was actually shot several months before Lasso became a sensation and gave Sudeikis the role of his career so far, as well as a couple of Emmys he took home last month. As Jimmy Ray, who as we meet him has just been paroled after serving 12 years for armed robbery, Sudeikis has a role polar opposite in many ways to the kind-hearted Lasso, but his initial motivation here to deliver one year of the best last year of life ever to his terminally ill fiancée is well-meaning, even if we know things will be going, uh, south.

Jimmy Ray wins parole by telling the board of his marriage plans and hopes to cheer cancer-stricken wife-to-be Annie (Evangeline Lilly), who meets him at the prison gate to welcome him back to some sort of normal existence. However, his shady parole officer Schmidt (Shea Whigham) creates a creepy vibe right from the start and soon sets him up for a parole violation unless he agrees to do some illegal dirty work for him. With no choice, Jimmy Ray is back flirting with the dark side as he visits some low-level criminals to retrieve a package meant for Schmidt. Saying he is only a “messenger,” he soon discovers it is a trap for Schmidt, but his own tough past comes into play as he disarms these guys and is allowed to go on with the assignment. However while he is driving at night he is temporarily distracted and slams his car into a motorcyclist, grossly resulting in cutting the rider in half. It gets complicated from there even after enlisting his friend, Honest Frank (Jeremy Bobb), to help in the cleanup.

In one of a few credibility-challenging plot developments it turns out the dead guy on the bike was delivering a cool half million to very bad guy Whit Price (Mike Colter), who is able to connect Jimmy Ray to the failure of the delivery and suspects he took it from the guy’s remains. In no time Price is paying a visit to Jimmy Ray’s home only to find out he is not there, but Annie is. He uses her as bait, all the while striking up an oddly sympathetic stance toward her as she reaches him on the kind of human level he is not used to seeing in these situations. In a tit-for-tat move Jimmy Ray nabs Price’s young son, Tommy (Thaddeus J. Mixson), and you can bet things really explode from there.

Like I say, it gets complicated. It also gets a little tiring as character development is at a minimum here, with most of the actors stuck in stereotypical roles for this kind of genre exercise. Keshales’ Tarantino fixation is evident, but he doesn’t have that master’s sense of story or how to pull this kind of thing off. Perhaps it wasn’t a good thing that Tarantino said Keshales’ 2013 cult hit Big Bad Wolves was the best movie of that year. Keshales is no Tarantino, but does know how to stage menacing action sequences.

Attention will undoubtedly be paid to here due to the presence of Sudeikis, and he surprisingly seems comfortable in an unexpected star turn, but his relentlessly sullen tone and unfortunate choice of accent don’t really measure up. The accent in particular is just too reminiscent of Ted Lasso, even to the point of distraction, at least for me. If you want to see a terrific Sudeikis performance in an overlooked movie, check out Kodachrome over at Netflix instead of investing two hours in this. Fans of gruesome and bloody violence might be happy though.

Check out my video review above with scenes from the film. Do you plan to see South of Heaven? Let us know what you think.