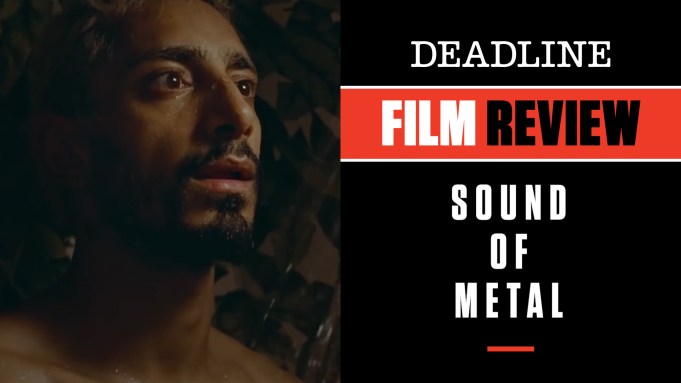 If heavy metal isn’t your bag, and the thought of watching a heroin-addicted musician lose his hearing makes you uncomfortable, do not fear. Both those elements help set the table for the powerful new film Sound of Metal, but this fine movie is so much more than its premise. In fact, with director/co-writer Darius Marder (The Place Beyond the Pines) in control, this 10-year journey to the screen proves well worth the effort as both a technical triumph of filmmaking and a humane and enlightening study of a man who feels his life is over when diagnosed with the loss of his hearing — a vital component as the drummer of a metal band and the reason he thinks he has for living at all. Without it, who is he? That key question that is slowly answered in this compelling character study made all the more effective with a career-best performance from Riz Ahmed (a 2017 Emmy winner for The Night Of), whose singular dedication to every facet of this challenging role pays off in a haunting and authentic turn hard to shake off after seeing.

Ruben (Ahmed) leads a wild life. Addicted to heroin and the drummer in a metal band that plays at the loudest possible levels, his life comes crashing down when increasing bouts with hearing disorders leads to him finding out he is going deaf. It is a devastating blow in many ways, not the least of which in how it affects his relationship with girlfriend and bandmate, Lou (Olivia Cooke), who eventually convinces him to go to a special rehab facility specializing in addiction recovery for the deaf community. This is definitely a world to which we see it will take time for him to adjust, and in Ahmed’s hands as well as the extraordinary sound design that puts us right in his head, we experience first-hand exactly what is happening to this man.

His big personal hope is to regain hearing through an expensive process that requires surgery and then wearing a device on his head that will supposedly bring him back to his previous state. Meantime, he stays in rehab, where learning lip reading and American Sign Language gives him a new outlook and purpose. Complications arise when his plan for surgery collides with the healing not hearing restorative mantra of the facility. The result of his decision provides a wallop of a third act that is played with a dramatic tension almost exclusively taking place in his head and his internal fight to return to the life he once had.

Ahmed is astonishing here, learning to play drums and sign as he undertakes a physical transformation that allows him to simply inhabit Ruben with such quiet power and a range of emotions from anger to fear, hope and acceptance that you won’t soon forget him. It is one of the outstanding performances of this or any year, and another example of why Ahmed is among the best of his generation. Cooke, though given relatively brief screen time, is very effective as the girlfriend desperately trying to help however she can.

A real revelation is Paul Raci, exceptional as Joe, the man who runs the rehab facility, a veteran who lost his own hearing during an explosion in his final tour of duty in Vietnam, and now wise in his acceptance that life can have purpose beyond an earth-shattering setback. Raci is a child of deaf parents who grew up with sign language as a necessity, and a background similar in some ways to the role he plays. A scene where he quietly confronts Ruben’s decision to have surgery instead of adapting to the reality of his hearing loss is strong stuff, showing those in deaf culture do not look upon their lives as handicapped in any way. The casting here is admirable and just right, as the rehab residents are all actually deaf themselves, and many of them recovering addicts. In a small role near the end, French star Mathieu Almarac turns up effectively as Lou’s less-than-empathetic father.

Technically the film is nothing less than brilliant, with groundbreaking Oscar-worthy sound design created by Marder and key sound architect Nicolas Becker that puts us right there with everything happening to Ruben. Becker also closely collaborated with Darius’ brother Abraham Marder on the pitch-perfect musical score, a key element in helping the movie work as well as it does. The latter also co-wrote the script with his brother, and contributed a memorable song, “Green,” over the end credits. The director’s idea to include open captioning throughout is also inspired, giving hearing and deaf audiences the same experience in watching it all unfold.

Producers are Sacha Ben Harroche and Bert Hamelinck. Derek Cianfrance is an executive producer and has story credit as this idea began with a docudrama called Metalhead. Amazon Studios begins streaming the film Friday.

Check out my video review above with scenes from the movie. Do you plan to see Sound of Metal? Let us know what you  think.