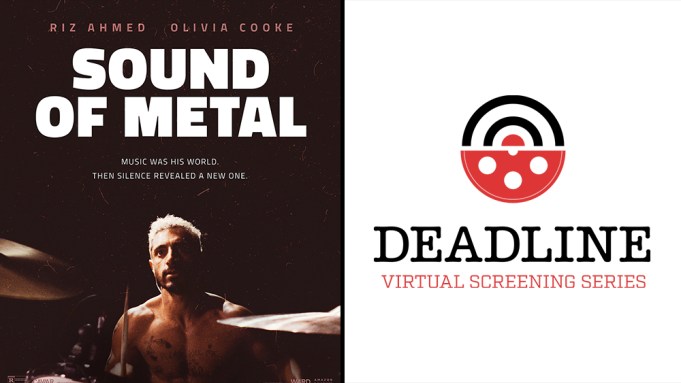 Amazon Studios’ compelling drama, Sound Of Metal has become an unexpected sleeper this awards season, emerging initially with little fanfare to becoming a strong Oscar contender.  Its star Riz Ahmed  has won several critics prizes already, and is nominated as lead actor for the Golden Globes, Critics Choice, and SAG awards. The film has also garnered 5 Critics Choice Awards nominations overall including Best Picture , and its screenplay is similarly being hailed as one of the year’s best.  Director and co-writer (with brother Abraham Marder)  Darius Marder joined me for a Deadline Virtual Screening  and conversation following for the film which centers on a Heroin-addicted drummer (Ahmed) in a Metal band who starts experiencing major hearing loss, turning his life and career upside down.  His girlfriend (Olivia Cooke) checks him into a rehab facility where his emerging deafness and issues with addiction come to a crossroads.  The movie that Marder made actually morphed in a way from another project he was doing with longtime collaborator, director/writer Derek Cianfrance.  Elements from that film which Marder was editing got him thinking about the themes that eventually would form the core of this very different project.

“He and I connected immediately, literally within 30 seconds of meeting each other. 13 years ago, we connected around this film, and I just adored Derek’s perspective. I was really drawn to it for my own personal reasons, and he and I of course have gone on to do lots of projects together, but this was the first, and it ended up that I took the footage, and  I spent a lot of time with it all those years ago, cutting. I’d done a lot of editing in my career, and I love it. So, I spent a lot of the time with the footage just cutting the footage and exploring it, and it was in that exploration that I actually found this, stumbled on this idea of point of hearing, which is what I’ve been calling it, and  this kind of perspective of hearing, and I was actually cutting some of that in a very early form with some kind of lo-fi audio, and I got so lit up about it, and I kind of knew that I wanted to write this, and long story short, that ended up happening of course, but yes. It really began with that real footage, and I’m so grateful for it,”  he said.

With the casting of Ahmed who had to learn the drums as well as American Sign Language for the role, Marder’s film really took on a whole new perspective as he believes the process of casting in and of itself can be so key. “It was really what was so exciting for me about it, and actually specifically with Riz, and it’s such a highly charged creative process, maybe the most creative part of making a film is casting it because you’re obviously  going to kind of alter it in the most profound way. Finding Riz was so wonderfully surprising for me because I didn’t know Riz very well before that, and I’d just watched The Night Of, but I didn’t know all of his work, and I didn’t know him, and when I found him, I found this man who’s obviously really talented, but he’s also like a savant and he’s a control freak.  He likes to analyze and take things apart  and of course so is (his character) Ruben. Ruben’s a control freak. That’s how my brother and I wrote it, and very diligently. He’s an audiophile. He likes to literally manipulate and control sound. He controls his body. Why? Because he’s an addict and he needs to keep life in control, and it’s the whole essence of the movie is that Ruben’s in control,” Marder explained.

“So, when I found Riz, I found that, and the essence of that truth was really exciting I think to both of us because what it meant was there was this potential for Riz to go on a journey that was very similar to Ruben’s in which he had to do the thing that was most difficult, that scared him the most, which was to relinquish control, and what that meant was of course learning the drums. You could say it’s an act of control, but for Riz it was really about the arresting of control because you can’t force those synapses to work. You can’t force the right and left hemispheres of your brain to connect. You can’t. You have to put the time in, and you have to kind of give into it. Same is true with ASL, but all of that was in service of hitting that set and actually going on this really wild process of having no control. It was like doing all of that preparation to completely give in, and so there really was this very meta process with Riz. It was really exciting.”

To watch part of our conversation about Sound Of Metal just click on the link above.