Continue to Deadline SKIP AD
You will be redirected back to your article in seconds
Skip to main content
February 14, 2020 4:27pm
12Comments 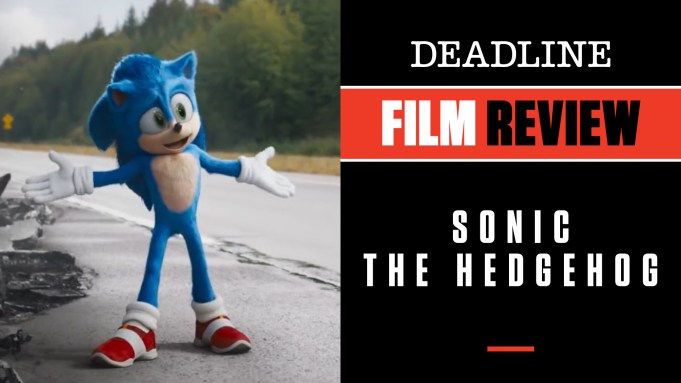 OK, so I confess I wouldn’t know Sonic the Hedgehog from Sonic the Hedgefund. Nor do I really care about a film version about a 1990s video game sensation and a speed demon character that hits 265 mph while basically taking a stroll. So take this all with a grain of salt: Sonic the Hedgehog  isn’t my thing, but it could be yours especially if you are about 9 years old and your head barely raises above the theater seat in front of you, or if you are hitting 40 this year and feeling a bit nostalgic about a youth wasted trying to keep up with this digital blue creature.

His origins don’t really matter to me, though, and I was ready to roll with it if the script was smart and clever and the filmmaking above average for kid fare. Unfortunately, I found Jeff Fowler’s direction uninspired — just a step above kids TV but with a much bigger budget — and the screenplay by Pat Casey and Josh Miller pretty much by the numbers. Perhaps if the film was completely an animated affair it could have had a loony quality to it, one that isn’t bogged down in this live action/animation hybrid that only makes you realize just how great Who Framed Roger Rabbit really was, or even Pokemon: Detective Pikachu, which shares similarities to Sonic and also had its origins in Japan.

There was controversy all over social media when the first teaser trailer came out revealing a version of Sonic that wasn’t the pinpoint perfect rendering of what fans remember — particularly the teeth. So to Paramount’s credit, knowing this thing dies at the box office without fan satisfaction, it was back to the drawing board. Apparently it was successful digital dental surgery, since I saw no picket signs in front of AMC and Regal today. That still doesn’t make it suffrable for anyone but the target audience. The dialogue is flat, and try as he might, James Marsden, who plays the small-town sheriff who gets swept up in Sonic’s world, is likable enough but pretty bland.

Leave it to Jim Carrey, summoning everything he remembers from his Ace Ventura era, to ratchet up these proceedings. His evil villain, Dr. Robotnik (a character who uses a force of drones as weapons), does his best to liven things up as he aims to catch Sonic and conduct experiments on him. But even his comic high jinks don’t rise above one dimension, with Carrey even resorting to twirling a mustache that gives him more in common with Snidely Whiplash than any contemporary film villain. That said, he does get off the best lines in the thing, though sadly very few are LOL funny. He comes into picture, by the way, to investigate the elusive Sonic when much of the Northwest goes dark, an event suspected to have something to do with Sonic’s gold rings and energy force. Or something like that. It is all very frenetic and as fast-paced as you might expect with a supersonic character like this. Ben Schwartz voices Sonic but doesn’t bring much distinction to him and has nowhere near the number of laugh lines he had on Parks and Recreation.

My qualms aside, fans won’t stay away, and judging from the reaction at the Thursday night preview I caught in Century City, they will likely also eat it up. That’s fine. Paramount could use a hit right about now and this seems to be it, so if this is your thing, go for it. Producers are Toru Takahara, Takeshi Ito and Neal H. Moritz, the latter seemingly drawn to speed as he is the producer also behind the Fast & Furious franchise. Sonic opens today.

Check out my video review above which includes scenes from the film. Do you plan to see Sonic the Hedgehog? Let us know what you think.