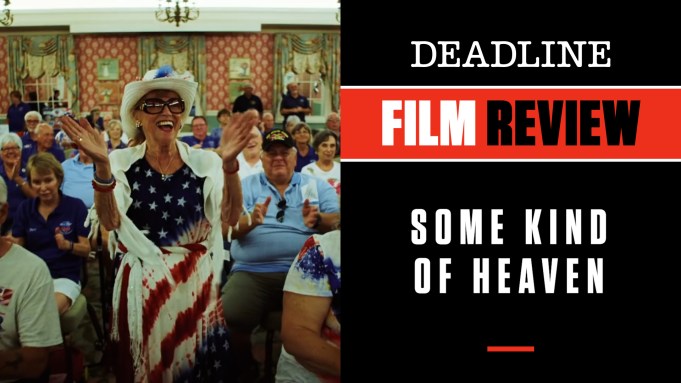 I didn’t know that filmmaker Darren Aronofsky (Requiem for a Dream, mother!, Black Swan, The Wrestler) was attached to the documentary Some Kind of Heaven when I sat to down to watch it for this review. All I knew was that this movie was about life in Florida retirement community the Villages, but soon I discovered that this was a much darker and twisted docu than you might imagine its core subject matter would provide. So when Aronofsky’s name flashed by at the end credits as a producer, I thought, “of course,’ because this movie seems right in line with the kind of things he puts into his own films, generally a darker vision of the lives we lead.

Aronofsky serves as sort of a guide and mentor for the real genius who made the ironically titled Some Kind of Heaven, and that would be Lance Oppenheim, a young documentarian previously known for his offbeat shorts including Long Term Parking and The Happiest Man in the World and here making his feature debut. What a debut it is! Setting out to make a film on the Villages, Florida’s vast retirement community that is a self-styled “utopia” and fantasyland of living facilities for seniors who are being sold a “happily ever after” idea of life in their golden years, Oppenheim basically moved in for a few months — undercover, as it were — to stake out the territory and come up with angles to tell this story in a way that defies the marketing materials. Soon he would discover his “cast” and, with the eye of a great filmmaker, knew that by following the key figures he finds in various places at The Villages, he could tell a tale of humanity looking for the good life but falling short.

With his cameras at the ready, and somehow evading the suspecting eyes of Villages management, he introduces us to a disparate group including married couple Anne and Reggie Kincer, wed 47 years but entering a dangerous phase where Reggie wants to party more and experiments with drugs as Anne’s discontent emerges. Then there is Barbara, who came to the Villages for her “happily ever after” with her husband but found it cut short when he suddenly died, leaving her to have to keep a full-time job and chronic depression about what life has thrown her. Then there is Lynn Henry, a freewheelin’ golf cart salesman and senior Jimmy Buffett fan Barbara thinks might be her answer to renewed happiness (or not). And most interestingly there is Dennis Dean, former handyman to the stars and an interloper at the Villages who lives out of his van and seeks a rich old widow to take him in. Weaving these stories in and out, Oppenheim creates a remarkable portrait of life after 65, the promises not kept and the complexities of life still with us as we look for the American dream in our sunset years.

Whether these particular episodes are indicative of everyone really living in this contained community is not a question; we are sure many residents are quite content as they live out their lives in this sealed environment. But by zeroing in on those Oppenheim does let us meet, he creates a fascinating palette of humanity in a documentary so real and convincing you would swear these are all actors in a movie that this extraordinarily promising filmmaker has completely made up — a movie that Darren Aronofsky himself might have made. Some kind of heaven this may be for many, but it is some kind of something else for others.

Check out my video review at the link above with scenes from the film, which premiered at last year’s Sundance Film Festival. Magnolia releases it, from the New York Times film division, today in various formats.

Do you plan to see Some Kind of Heaven? Let us know what you think.