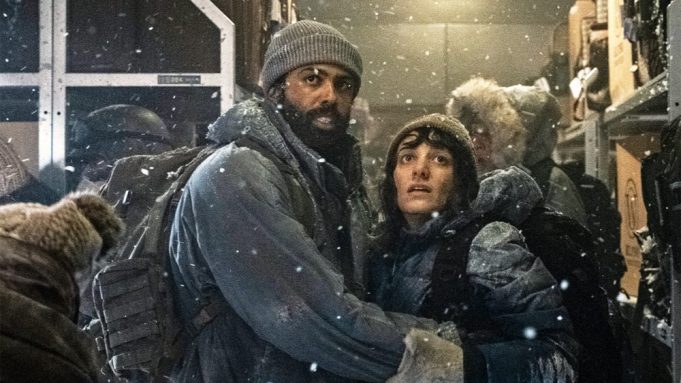 The new TV adaptation of Bong Joon Ho’s 2013 post-apocalyptic sci-fi feature Snowpiercer based on the graphic novels by Jacques Lob and Jean-Marc Rochette pulled into Comic-Con with a new trailer as well as some first-look footage. Showrunner Graeme Manson was there to talk about the TBS series starring Jennifer Connelly, Daveed Diggs, Alison Wright, Mickey Sumner, Lena Hall and Steven Ogg. They were joined by executive producers Marty Adelstein and Becky Clements of Tomorrow Studios.

The trailer is certainly in line with the feature, showcasing the division of class and a bloody mutiny that happens on a non-stop train which houses the civilization as it traverses through what is now the icy remains of Earth. We see Connelly play a woman from the more elite part of the train who keeps order while Diggs plays a “tailie” who takes part in this uprising.

Set more than seven years after the world has become a frozen wasteland, Snowpiercer centers on the remnants of humanity, who inhabit a gigantic, perpetually moving train that circles the globe. Class warfare, social injustice and the politics of survival play out in this riveting television adaptation based on the acclaimed movie of the same name. The series was renewed for season two prior to the season one premiere.

The new series is set to premiere in the Spring of 2020. Watch the trailer above.