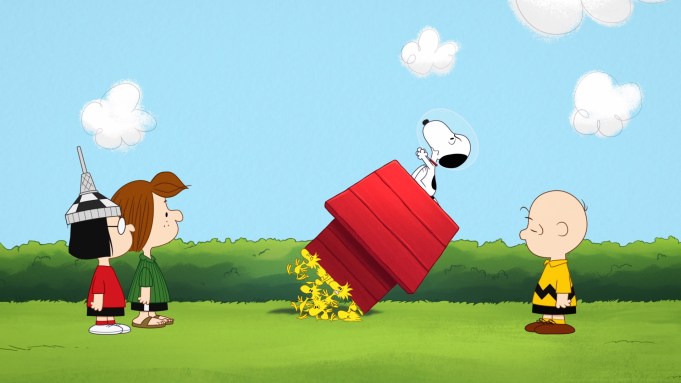 Fifty years after man landed on the moon, it is time – as Apple says, in so many words, in this new first-look teaser trailer for its upcoming Snoopy in Space series – for a dog to have his day.

Set to music familiar from 2001: A Space Odyssey (no, not that music – the go-to Also Sprach Zarathustra is bypassed here for Strauss’ The Blue Danube), the clip shows Snoopy gleefully floating through space before plummeting to Earth and landing on a certain yellow feathered friend.

Snoopy in Space debuts exclusively this fall on Apple TV+, the new video subscription service featuring original shows, movies and documentaries. The service launches in the fall via the Apple TV app.

The logline for the series: “Snoopy in Space follows Snoopy as his dreams of being an astronaut become a reality when he and Woodstock tag along with the Peanuts gang on a field trip to NASA and are chosen for an elite mission into space. As Snoopy and Woodstock fulfill their dreams of astronaut training and space travel, Charlie Brown and the gang assist their friends from mission control.”

The series is produced by DHX Media. The deal between Apple and DHX Media was announced in December. Working closely with its subsidiary Peanuts Worldwide, DHX Media said it would develop and produce original programming based on the Charles M. Schulz characters.

Also last year, Peanuts Worldwide partnered with NASA on a multi-year Space Act Agreement designed to inspire a passion for space exploration and STEM among students.

In May, Apple TV launched the faux-documentary Peanuts in Space: Secrets of Apollo 10, on the Apple TV app (not to be confused with Apple TV+).

Take a look at the Snoopy in Space trailer above.