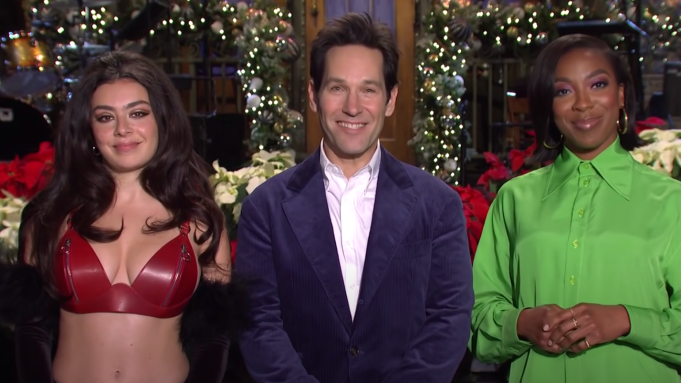 Ant-Man star Paul Rudd will host Saturday Night Live for the fifth time this weekend but, in the promo for the upcoming show, that’s not the five-timers club he’s exciting about joining. When he reveals its nature, musical host Charli XCX is less than impressed, while castmember Ego Nwodim is happy for him.

Neither, however, is enthusiastic about his “bizarre” Christmas wishes.

In hosting for the fifth time, Rudd crosses a threshold into the rare air that surrounds the show’s most beloved hosts. Among his fellow travelers are Will Ferrell, Dwayne Johnson, Jonah Hill, Melissa McCarthy, Ben Affleck, Bill Murray, Justin Timberlake and Candice Bergen.

It’s a long way from Alec Baldwin’s 17 hosting stints — and that of the few others whose tally falls between 5 and 17 — but still a mark of distinction in the world of comedy.

Rudd starred in Ghostbusters: Afterlife this year with a couple of old SNL hands, Murray and Dan Aykroyd. His next feature-length adventure in the Marvel Cinematic Universe will come with 2023’s Ant-Man and the Wasp: Quantamania.