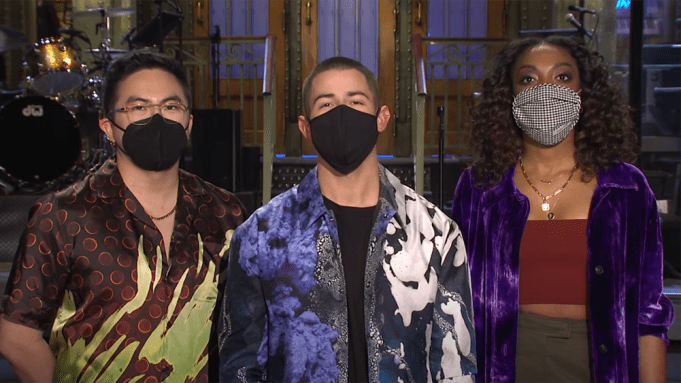 Nick Jonas will pull double duty in this week’s Saturday Night Live as host and musical guest. But in the latest promos, the “Spaceman” singer isn’t feeling the love from cast members Bowen Yang and Ego Nwodim.

The teaser features Jonas sandwiched between Yang and Nwodim, who tell the Grammy-nominated singer that Saturday night will be his make-it-or-break it moment. The SNL cast members hype up Jonas saying, “If you can make it here, you can make it anywhere,” “It’s your big shot” and “Don’t blow it.”

Despite the encouraging messages, Jonas says he disagrees.

“I think I already made it because I’m already a very successful music artist,” he replies.

“Fake it till you make it,” Yang adds, patting the singer on the back.

In the second promo Nwodim and Yang act shocked to hear they will not be the upcoming episode’s musical guests.

“Why would you think that?” Jonas asks.

“Because our single just dropped, ‘You Idiot,'” Yang replies.

Upon seeing Jonas seemingly offended by his remark, Yang clarifies that “You Idiot” is the name of the new song he and Nwodim released. After prompting the absent SNL band to play, the cast members sample their number.

“He loves it,” Nwodim and Yang say.