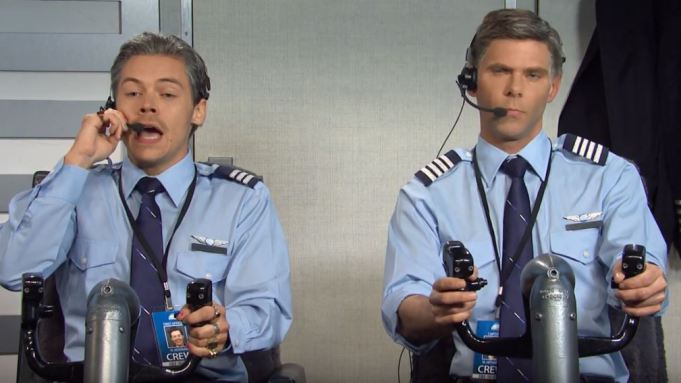 The film got a shout-out in “Airline Pilots,” a skit that starred Mikey Day and the night’s guest host Harry Styles as co-pilots whose raunchy conversation from the cockpit is picked up on the flight intercom. Their efforts to apologize just make things worse, as a conversation about the sexual prowess of the gang in Scooby-Doo actually manages to further devolve.

About in the middle of the mess, Day’s character notes that “Jet Blue’s” in-flight movie is “teen comedy Booksmart, fun for the whole family.” But then Styles’ character tries to warn: “Maybe not the whole family, there’s some lesbian stuff in there,” with his next comment a reference that means something completely different when you’re on an airplane.

The reference comes after Delta Air Lines earlier this month said it would stop showing edited versions of the Booksmart and Rocketman on its in-flight offerings, and was working with its vendor to get editions that restore deleted same-sex love scenes. The issue of the edited versions came up when a fan tweeted the information to Wilde, complaining that a key love scene was deleted. Wilde later saw an edited version on a flight and noted there were many other cuts.

Wilde asked, “What message is this sending to viewers and especially to women? That their bodies are obscene? That their sexuality is shameful?”

Delta said in a statement that it did not ask for any “homosexual content” to be removed. “We value our inflight entertainment options as a means to reflect the diversity of the world,” the company said. “We are reviewing the processes of our third-party editing vendors to ensure that they are aligned with our values of diversity and inclusion.”