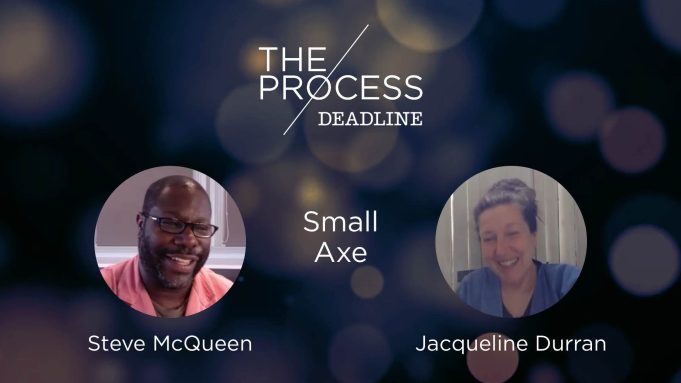 When Steve McQueen set out to create and direct Small Axe, he seized the opportunity to work for the first time with costume designer Jacqueline Durran.

A two-time Oscar winner (for Little Women and Anna Karenina) and six-time nominee, Durran is among the most decorated costume designers working today. (Just yesterday, she was recognized with the BAFTA Television Craft Award for Costume Design, for her work on Small Axe.)

It’s important to note that Durran was one of three costume designers elevating the star-studded series, set between 1969 and 1982, which centers on the real-life experiences of London’s West Indian community. While she crafted looks for the films Lovers Rock and Alex Wheatle, Sinéad Kidao handled Education and Red, White and Blue, with Lisa Duncan designing Mangrove. In any case, McQueen seemed stunned by the “authenticity” and attention to detail Durran brought to the project.

Recently, the pair appeared in the inaugural edition of Deadline’s video series, The Process, offering up what amounts to a master class on the collaboration between a director and his costume designer. During the 30-minute Zoom chat, Oscar-winner McQueen expressed his point of view that costume designers are “the brightest people on set” and compared Durran to the legendary costume designer Patricia Norris, with whom he worked on 2014 Best Picture winner 12 Years a Slave.

McQueen characterized Norris—who created costumes for Days of Heaven, Twin Peaks and countless other classics, while also serving as a production designer—as a “beautiful, hard broad.” While Norris was 82 by the time she collaborated with the director, she and McQueen became quite close. “I used to ring her all the time, just to chat sh*t with her,” the director shared. After 12 Years, he had hoped to work with Norris on many more projects but sadly, she passed away in 2015. “She was unbelievable. I love her and miss her very much,” McQueen said.

“I think you’re the closest person I’ve ever met who is like her,” he continued. “There’s a certain kind of selflessness. You give yourself over to the projects, and there’s a real kind of authenticity in how you engage.”

On The Process, McQueen shared that he first got acquainted with Durran’s work when he saw Justin Kurzel’s 2015 take on Macbeth, starring Michael Fassbender and Marion Cotillard. “I think [the costume design] was just very economical, and very practical, and very right,” he said. “I think often with Shakespearian films, things become very much theatrical, and this was much more practical—and because of that, it sort of enhanced everything.”

Durran said that when she was approached for Small Axe, it resonated immediately. At the same time, the notion of designing costumes for the series was daunting. “It’s quite an intimidating thing to take on because there’s not very much to pull on,” she said. “It’s not like a great amount of work that you can look at and see how different people have approached it, and how its been done, and I just felt that it really needed to be done with the degree of detail that had been missing.”

“I totally understand that you wanted to get it right,” McQueen responded, “and also because it’s a part of our history that hasn’t been visualized like this before at all.”

On Lovers Rock, Durran helped tell the story of Franklyn (Micheal Ward) and Martha (Amarah-Jae St. Aubyn), lovers who meet at a house party in 1980s West London. The film—taking its name from the musical genre of the same name, which rose to popularity in mid-1970s London—explores the sense of freedom and community found through blues parties, and the music of artists like Janet Kay, amidst a backdrop of racism and violence.

For Durran and McQueen, there was a sense of responsibility in depicting blues parties, knowing that they would be bringing them to many people’s attention for the very first time. One challenge of that film, for Durran, was to make the ’70s come alive. “People tend to think of the ’70s looking in one particular way,” she said. “[But] in fact, there were so many ways to look at the ’70s.”

In film and TV, Durran explained, ’70s fashion has been appropriated so much that it’s lost all sense of authenticity. In a sense, design for ’70s projects can simply become a copy of a copy.

From Durran’s perspective, part of what was so exciting with Lovers Rock was that its fashions hadn’t been recycled over and over on screen. “It’s such an exciting look because…it’s still there, and it’s not such a mainstream thing,” she said. “It wasn’t the thing that was picked up and reused, over and over again, and regurgitated in fashion.”

For the costume designer, making Alex Wheatle was an entirely different experience, presenting its own unique set of challenges. In this case, she’d be telling the true story of the titular British novelist, following him from the time he’s a young boy through his early adult years. After spending his childhood in a mostly white institutional care home with no love or family, Wheatle (Sheyi Cole) found a sense of community for the first time in Brixton. A key part of the film depicts Wheatle’s confrontation of his past and his path to healing, after he’s imprisoned, following the Brixton Uprising of 1981.

On this project, Durran had a different kind of responsibility on her shoulders, as she was telling the story of someone who was not only alive, but also heavily involved in the conception of Small Axe.

In bringing Wheatle’s story to the screen, she benefited tremendously from the award-winning writer’s depth of memory, as well as his openness. “He wasn’t possessive of that information, and he was quite relaxed about the interpretation of it,” said Durran. “He wanted to give me all of the facts about what he wore and as much detail as possible, but he then just sort of let it go.”

In their wide-ranging talk on The Process, McQueen and Durran also touched on the role fashion played in their lives growing up, the essence of Black style and more.