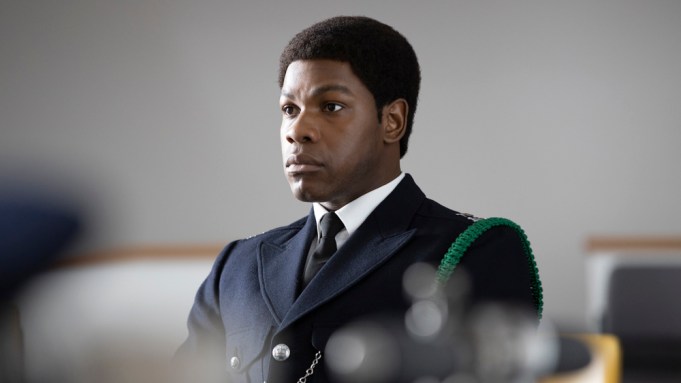 Amazon Prime Video has released the trailer for Red, White and Blue starring John Boyega, the third film in Steve McQueen’s Small Axe anthology series — and this installment is just as timely as the other films in the series.

Debuting on the streamer December 4, Red, White and Blue is based on a true story that follows Leroy Logan (Boyega), a young forensic scientist who is looking for something more beyond his solitary laboratory work. When he sees his father assaulted by two policemen, he finds himself driven to revisiting a childhood ambition to become a police officer — an ambition that stems from a naïve hope of wanting to change racist attitudes from within. Before serves and protects, he hurdles to overcome including his father’s disapproval and the blatant racism he finds in his new role as a despised yet exemplary Constable in the Metropolitan Police Force.

The original films in the Small Axe anthology are set from the late ’60s to the mid-’80s and tell personal stories from London’s West Indian community, whose lives have been shaped by their own force of will despite rampant racism and discrimination. The title is derived from the African proverb, “If you are the big tree, we are the small axe.”

Mangrove, the first installment of Small Axe, stars Letitia Wright and Shaun Parkes and debuted on November 20. The second, Lovers Rock, starring Amarah-Jae St. Aubyn and Micheal Ward premieres on Prime Video November 27. After the premiere of Red, White and Blue on December 4, the anthology will be rounded out by Alex Wheatle (December 11) and Education (December 18).