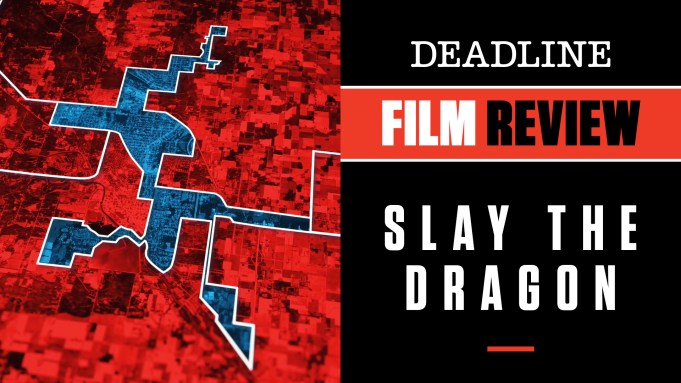 Participant Media is the production company behind a number of important issue-oriented films both narrative and documentary, including Oscar winners like Green Book, An Inconvenient Truth and its sequel, RBG, Spotlight, Citizenfour, and the all-too-prescient Contagion among many others. Its latest film, now hitting video on demand Friday instead of its once-planned theatrical break, is right in line with those highly important films and delivers an all too frightening, but not completely hopeless, message that hits right at the heart of American democracy.

Slay the Dragon is about gerrymandering and its use over the years by both the Republican and Democratic parties, but focusing intently on a 10-year effort by the GOP to manipulate voting patterns across America by targeting local state elections with the same kind of financial backing and negative ad barrage usually reserved for presidential campaigns. A movie examining the art and practice of gerrymandering isn’t on the surface exactly the sexiest kind of entertainment to curl up with in these dark times, but it is something that unquestionably should be seen. The practice essentially allows politicians in power to carve up congressional districts in such twisty and irrational ways as to almost guarantee their election, even in many cases without getting the most popular votes overall (it’s complicated, but think of the effect of the electoral college). It actually has been around since 1812 and got its name through the combination of the man who created it and a part of the word salamander, the slithery body that portends trouble. It is done every 10 years around census time and isn’t foreign to either major party, a method used by those in power to keep that power by carving up the territory, as it were, to eke out victories where logically they shouldn’t have them. It also has the effect of voter suppression.

The chilling film, directed by Barak Goodman and Chris Durrance and first seen at last year’s Tribeca Film Festival, saw its March 13 theatrical release plans torpedoed by the coronovirus crisis and instead switched to a VOD bow. It is worth finding any way you can. The filmmakers certainly point out the dire consequences that can come about because of successful gerrymandering, and make no attempt to keep the playing field even as the film’s target is clearly the GOP’s attempts to control elections in the last decade, particularly in the key locales featured here including Michigan, Wisconsin and North Carolina. It effectively explains how the process works but then puts a welcome human face on it showing how the disastrous Flint, MI water crisis came about because of it, as well as how the loss of collective union bargaining and voter ID requirements were a direct result of the election of Republican Gov. Scott Walker in Wisconsin, among other things.

But the filmmakers also show that maybe citizens can take back that power themselves, especially in the case of Michigan activist Katie Fahey, who launches an uphill petition campaign under the name Voters Not Politicians in order to get a ballot initiative and 50,000 signatures once thought impossible. She is a real force, an example of someone not in the system out to make a difference. The same goes for a North Carolina group who take the issue all the way to the Supreme Court. And lest you think this is all a left-wing hit blindsiding the GOP, Project REDMAP founder Chris Janowski is a willing interview on exactly what the Republican motives are and he doesn’t apologize for any of it. That is perhaps the most sobering part of the entire film. This is all happening in plain sight.

The ultimate message here is that politicians cannot be trusted to turn this practice around. Instead it is all in the hands of the people trying to “slay the dragon,” one state at a time.

Check out my video review above with scenes from the film. Do you plan to see Slay the Dragon? Let us know what you think.